This blog follows the previous one - Summer Breeze Open Air 2011 by Kai from Parasite Inc., he told me about the second day of the festival with the main stage which was finally opened this time…

Summer Breeze Open Air 2011 － Day 2：
Kai:  Arrived at the venue in the afternoon and missed The Sorrow. Well done Kai... urgh. After got stuck in a traffic jam I reached the main stage right in time for The Haunted. 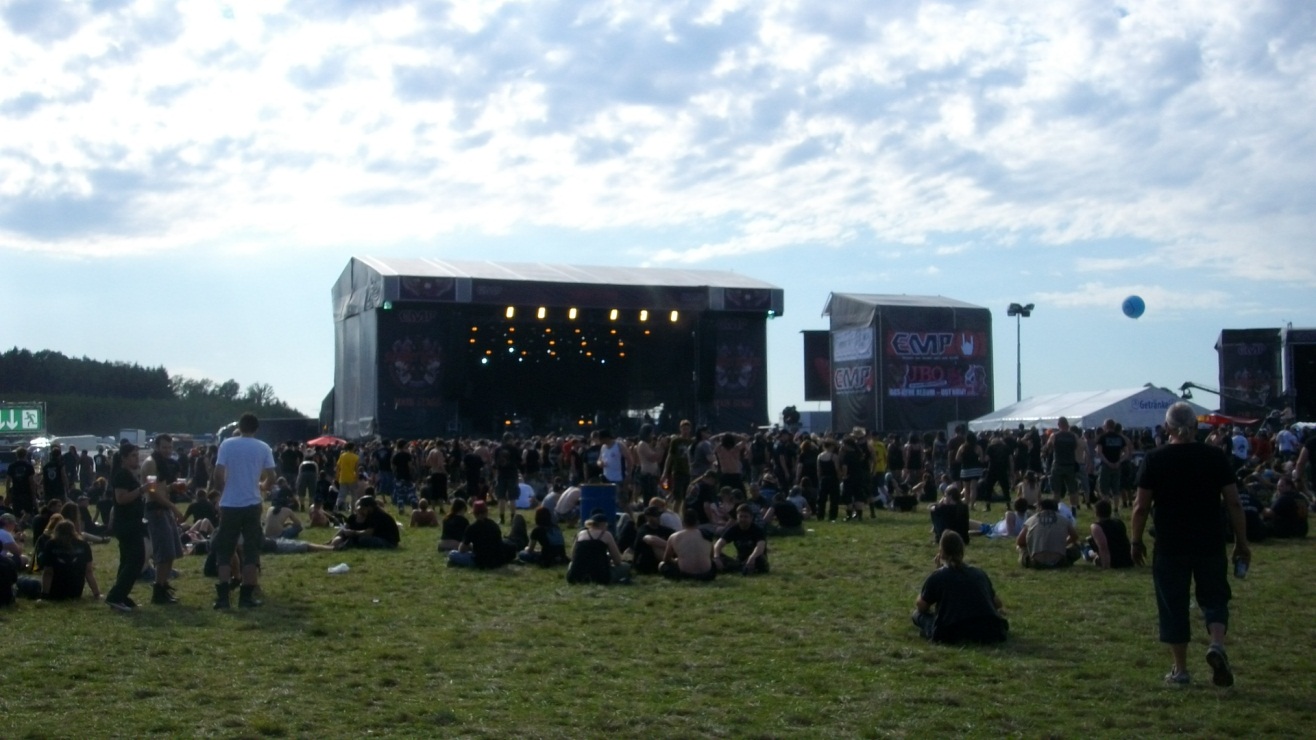 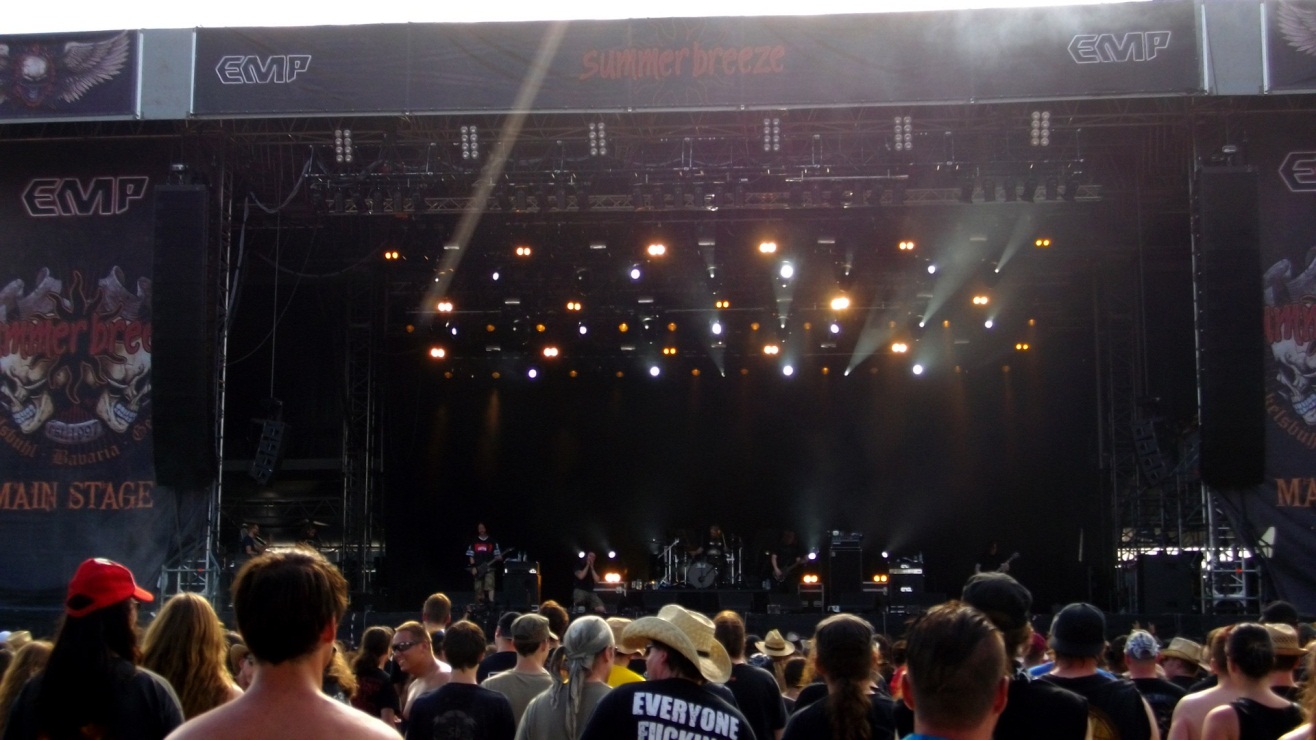 my first band today: The Haunted

Kai:  Really hot day and I watched them from a shady place a bit farer while having a  cocktail called Ipanema (tasty drink somehow). Oh, and btw. for you Japanese readers:

Peter (singer) said that they want to come to Japan in December this year after the cancellation of their show in May. So prepare for The Haunted in December 2011 ;)

Kai:  Well, it was horrible hot and I decided to get back to the tents of some friends and take a rest there. Only relaxed in a chair and watched them doing silly things like painting each others with water resistant pens or building weird puppets... the niveau was already dead... right...
I had already seen 3 naked people running around and people in weird costumes and all people went slowly crazy. 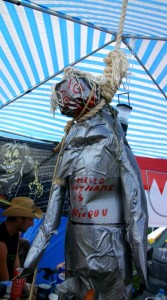 For those of you who don't know about the word "Niveau": Niveau is a France word and means in German a kind of intelligent level respectively mental level. 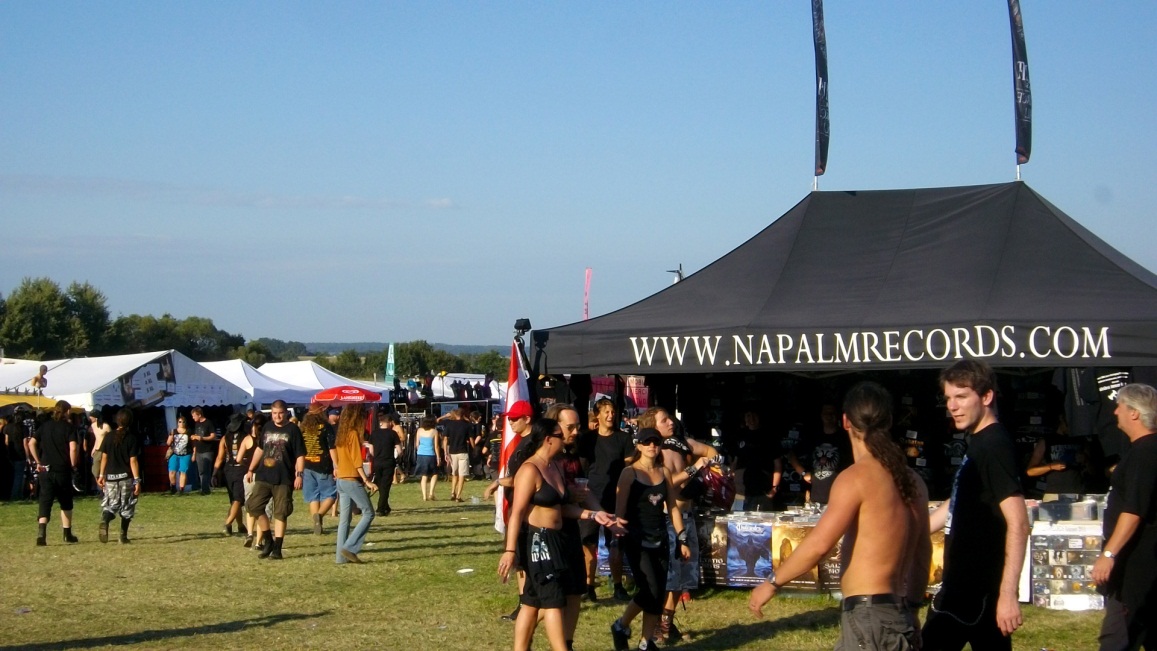 walking through the metal market

the party tent by day 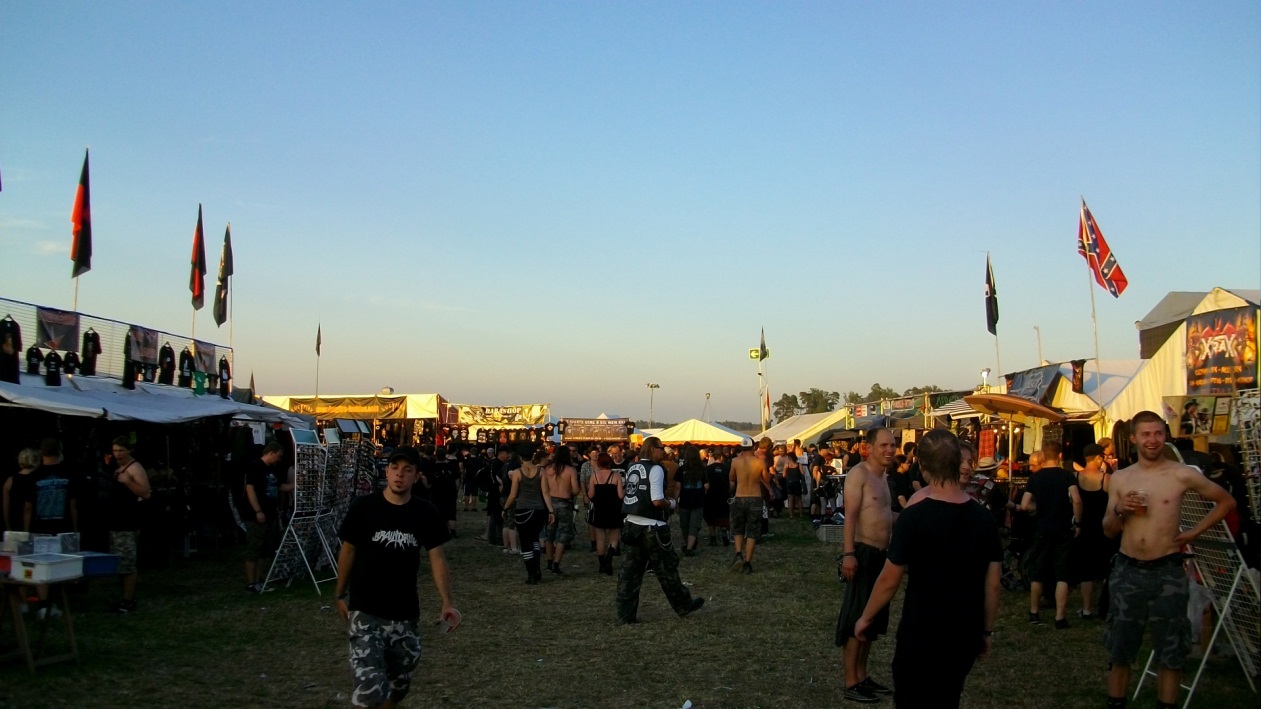 a lot of metal stuff there 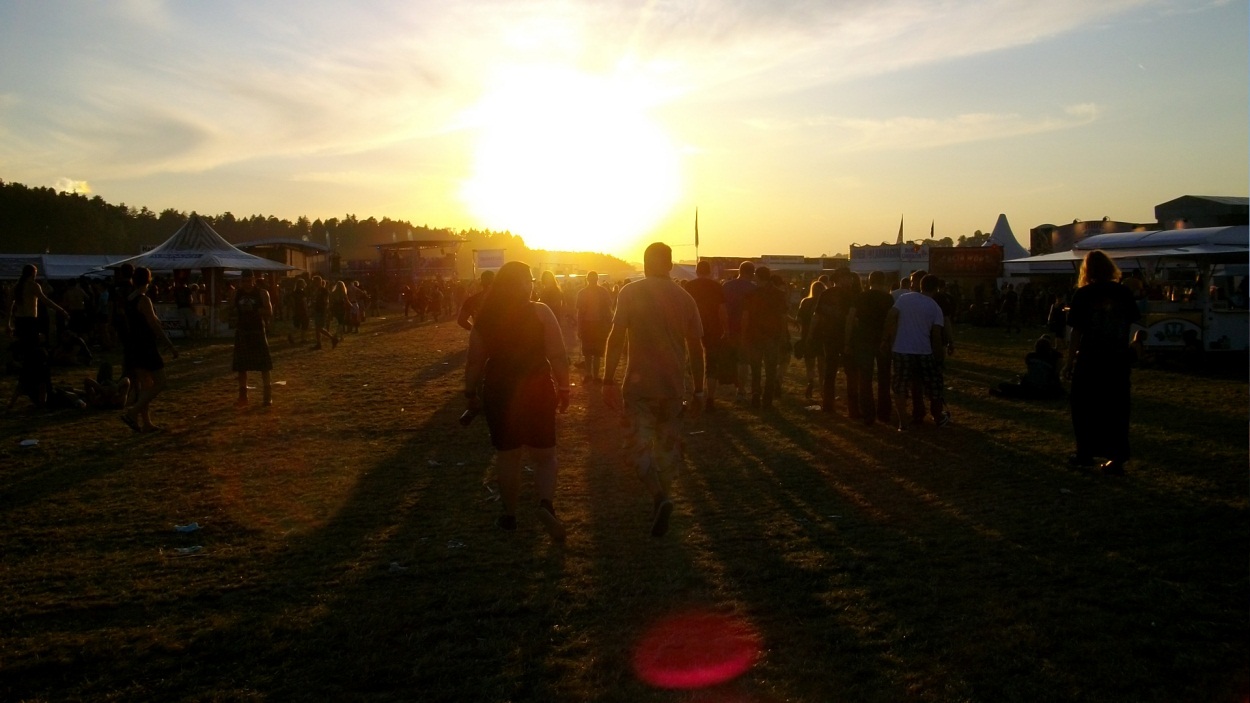 sun goes down again after a second hot day

Kai:  Went back to the stage area at 8.00 p.m.. I quickly met with Basti at the merchandise stand. 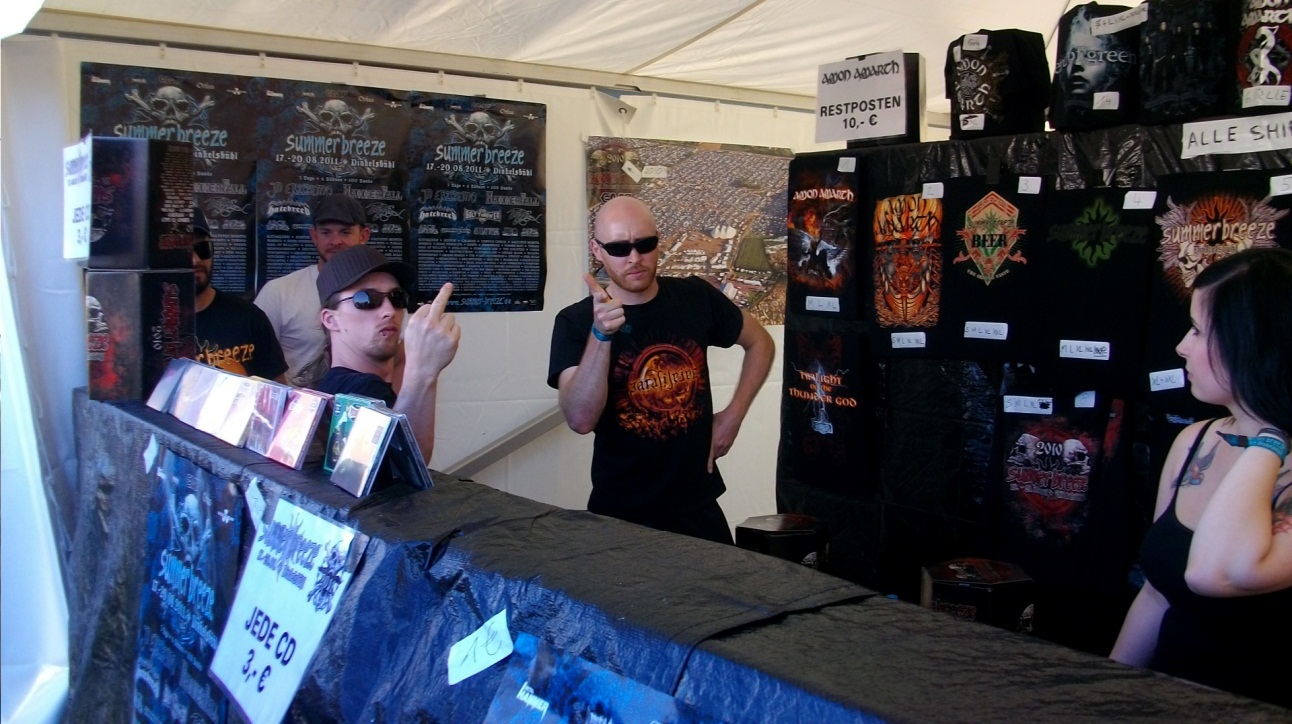 met Basti at the merchandise stand

Kai:  He has been working on Summer Breeze this year and got access to the stages. So I gave him my cam for making some pics of my next band: Arch Enemy. 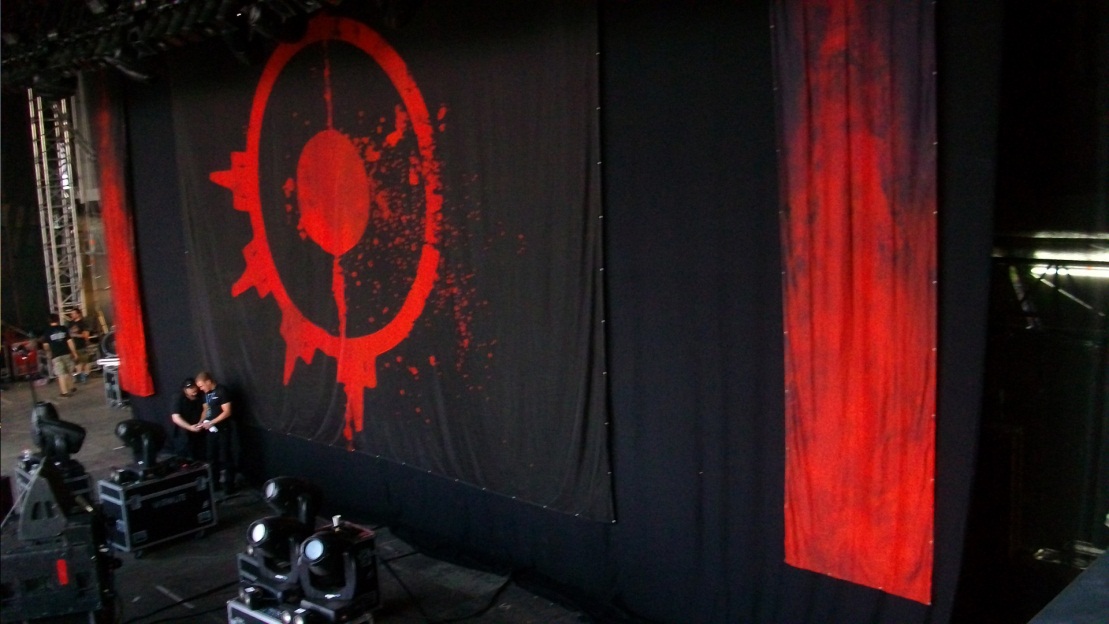 guess which band is playing in a few minutes 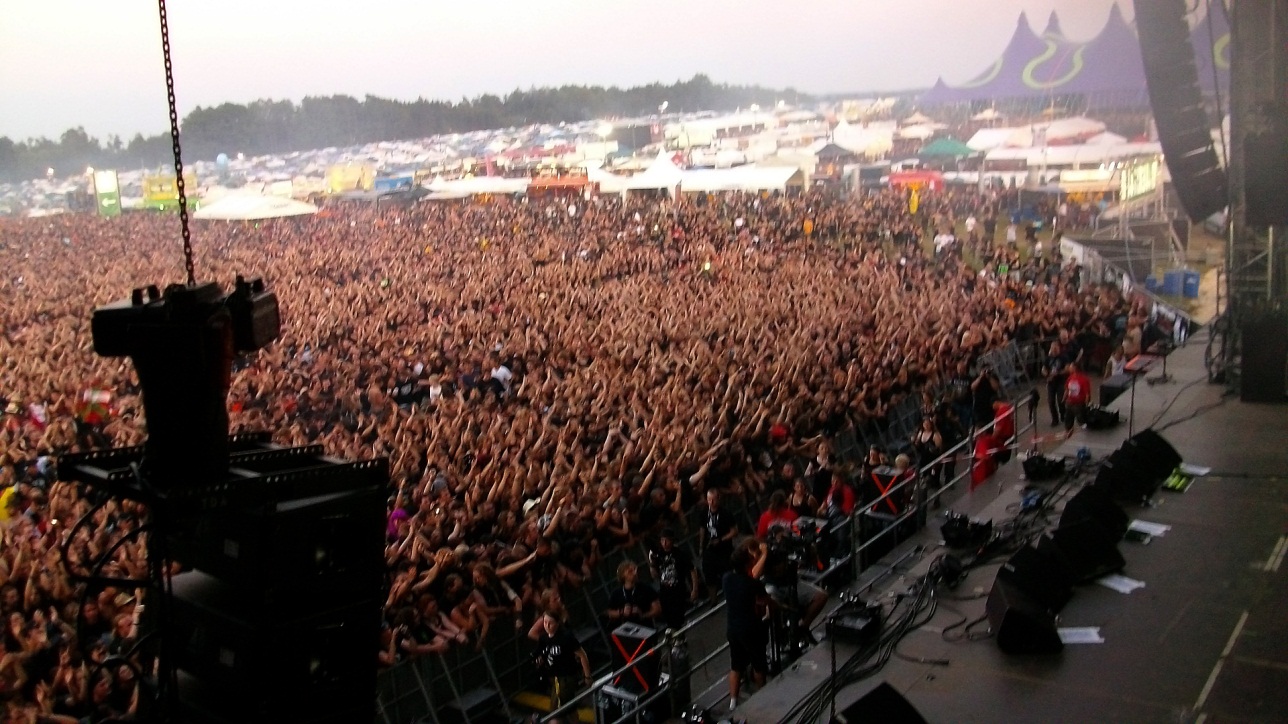 the area gets more filled with thousands of metalheads

Kai:  The whole area around the main stage was crowded with people for the first time now and for me it was the best band on the festival this year... Amazing sound, playing and choice of songs. Very impressive: Steam fountains to the deep sounds of "My Apocalypse". 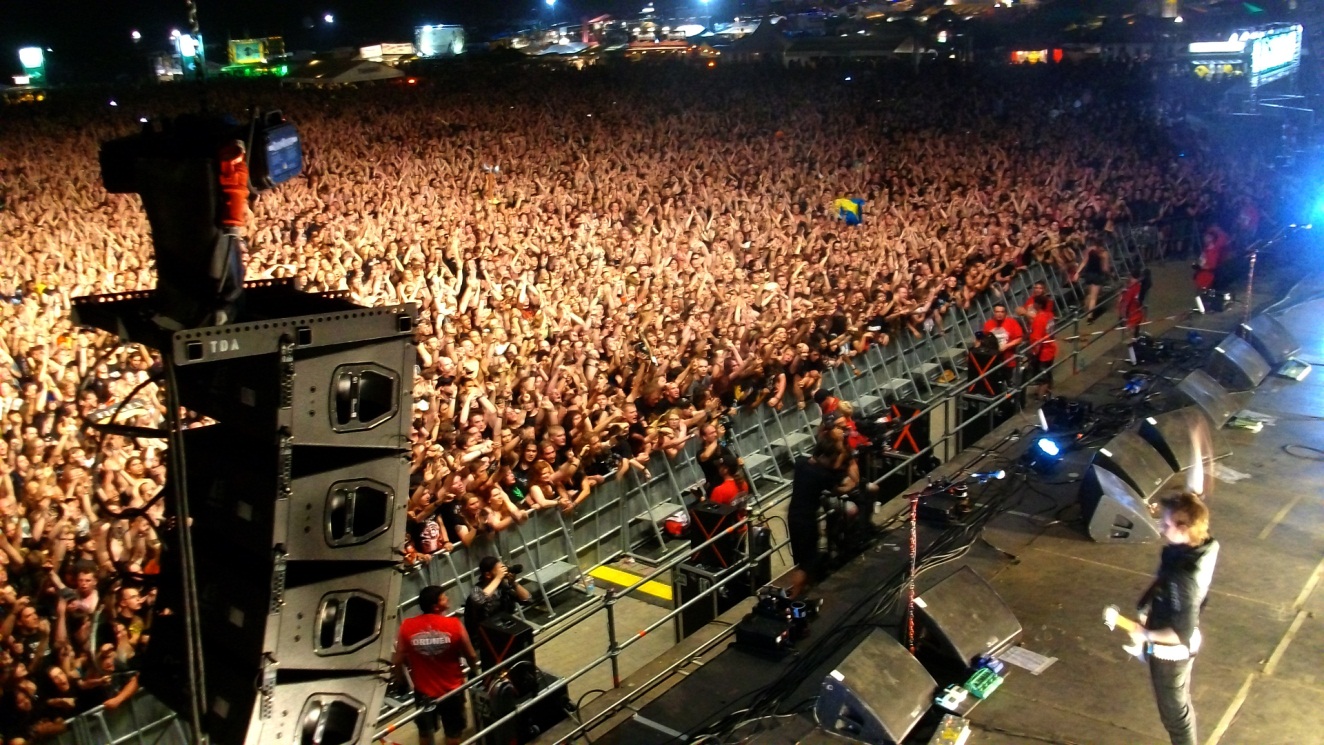 impressive stage view to the audience

Kai:  After having a short look to the reduced lineup (only 4 members left?) of Sonic Syndicate I only walked through the metal market until the Death Metal guys from Hackneyed started their show. 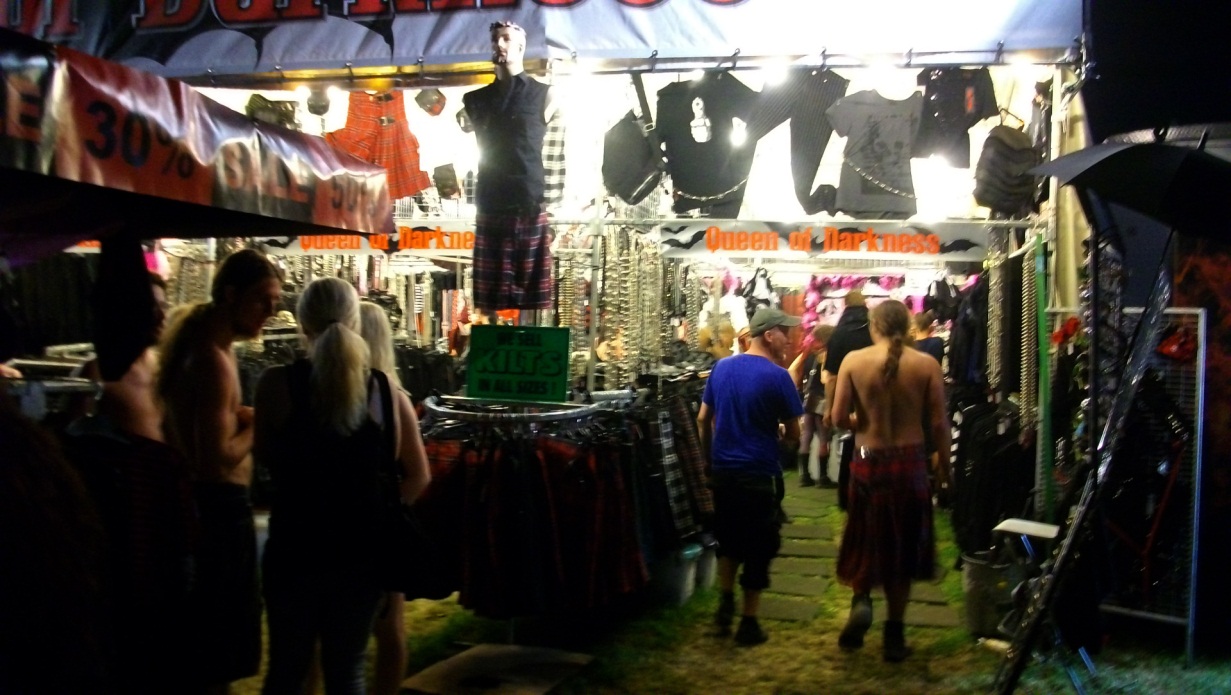 walked again through the metal market 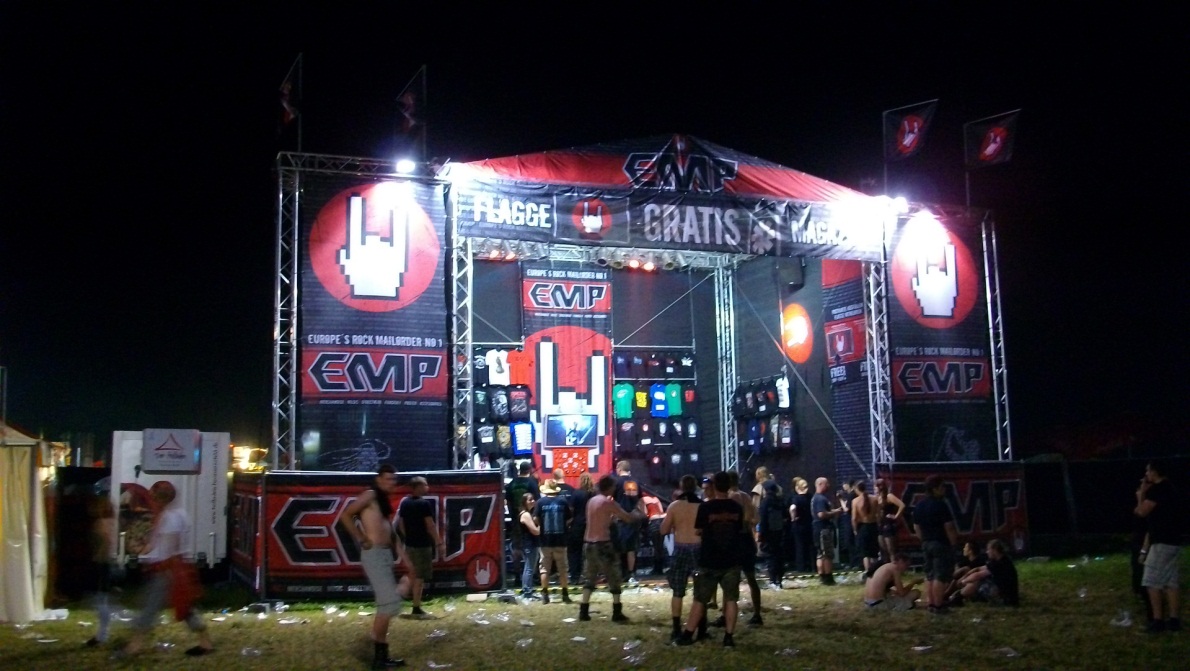 Kai: Phil (singer) screamed like the devil in person and they really did a great show. If you like Death Metal with deep guttural growls you should check them out ;). 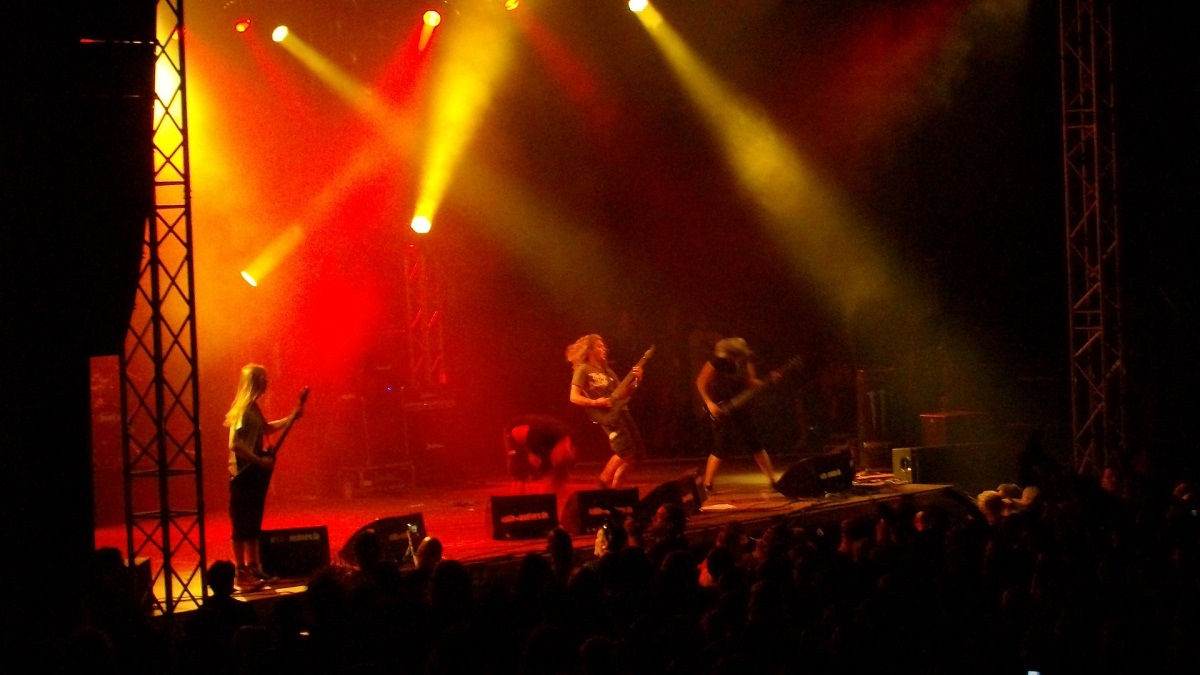 our friends from hackneyed destroying the party tent

That is about all of the second day of Summer Breeze 2011 with a lot of photos. Thanks so much for Kai again! It’s totally amazing and funny about the personalized and hanged “Niveau”, German metalheads have such a sense of humor, haha! Actually, I got a lot of amazing photos of Arch Enemy by Basti but I have to concern about the image rights and couldn’t put it on the blog, sorry. 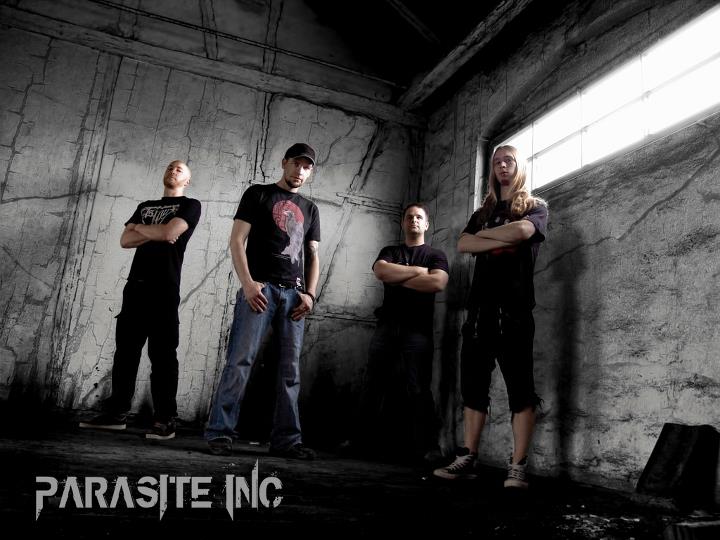 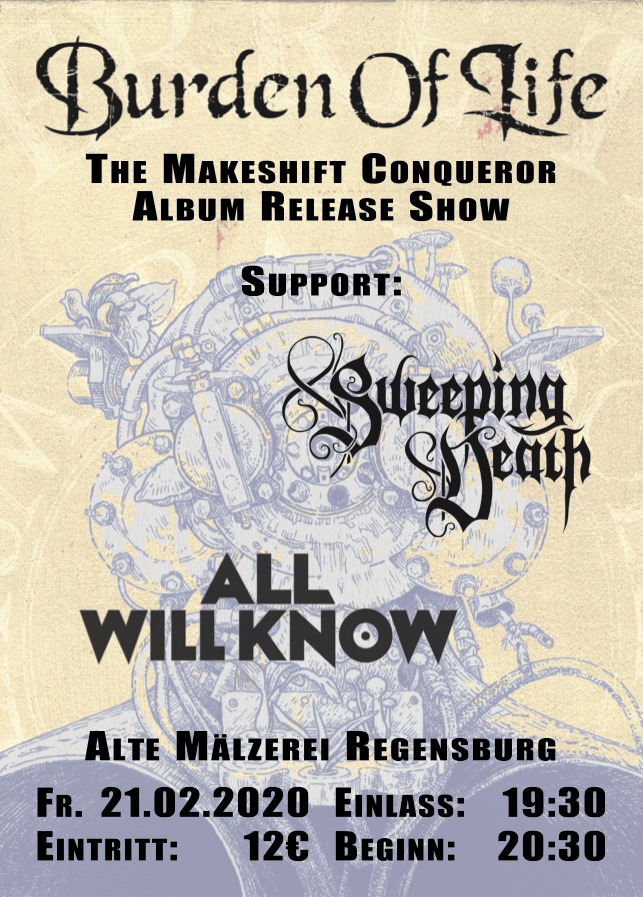 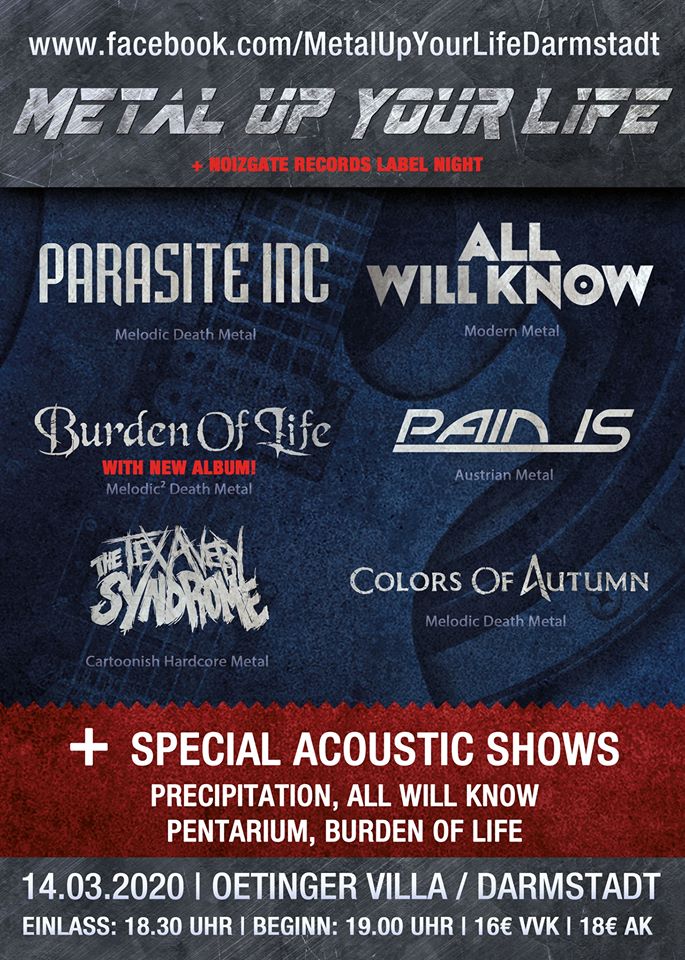 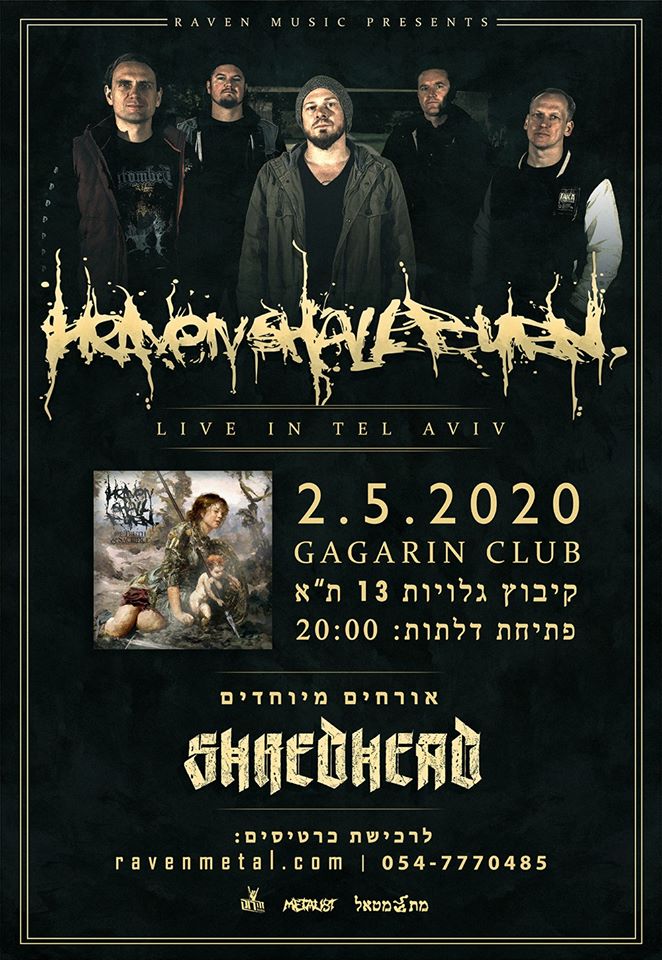 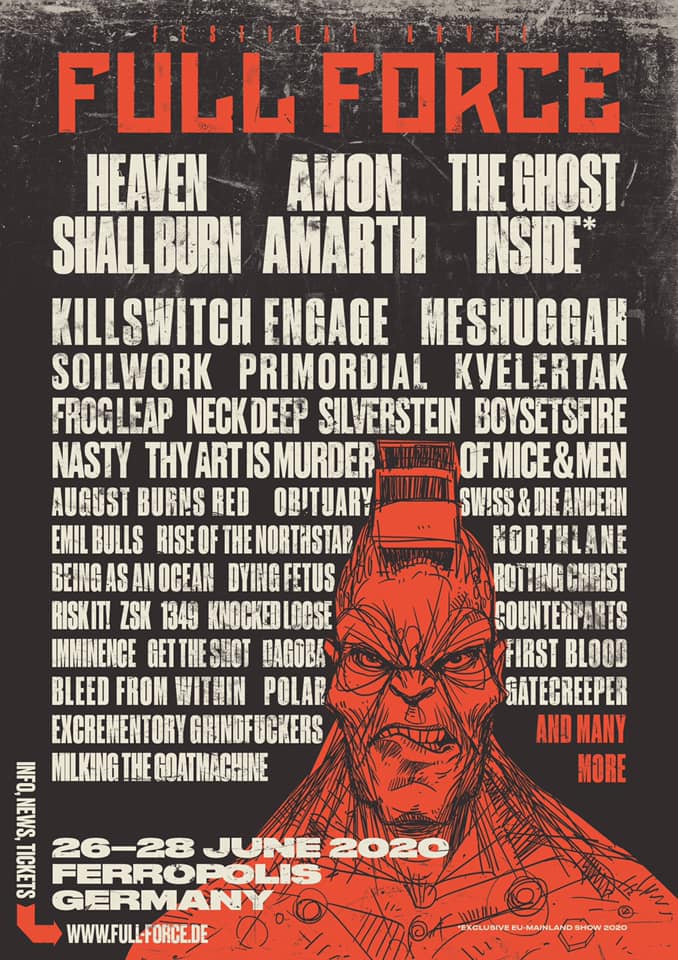