KADAVRIK Interview about their forth full-length “GRIMM I & II”

Germany has been bringing various amazing artists into the world and Grimm brothers were one of them. Even in Japan, they are well-known with “Grimm’s Fairy Tales”.

The black/melodic death metal band KADAVRIK from the country has released their new full-length after a little long interval from the previous album “N.O.A.H” and they made an epic challenge to choose the famous fairly tales for the concept of the album. I’m absolutely curious about it and decided to have an interview with them for the first time. 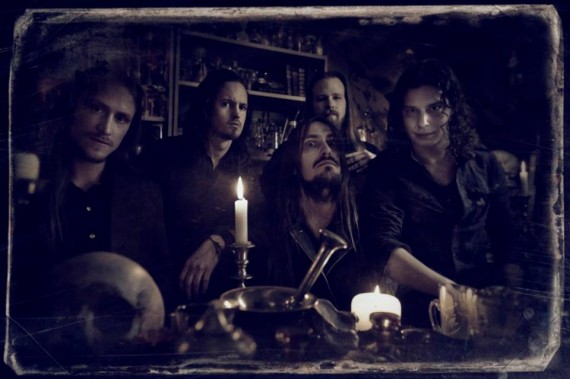 Hi there. First of all, congratulations for the new album “GRIMM I & II”! How are you feeling that your another ‘blood, sweat and tears’ is finally out?

Niklas: Hi Kumi! Oh, it was a relief. We struggled hard to get this record out in the way it is out now. But we didn’t actually cry or bleed to finish it.

“GRIMM I & II” was created as conceptional album based on Grimm’s Fairy Tales, right? Why did you name it “GRIMM I & II”?

Niklas: You’re pointing at the “I & II”, right? It’s because it was planned as a double-EP in the beginning. And we liked the idea of continuing the separation on the full-length album. That’s basically it.

Frank: Yes, it’s two parts, two cover artworks, two concepts - and “I & II” sounds special, doesn’t it? While the first part is an emancipated interpretation of the tale “The Girl without Hands” the second rather reflects on the distance between childhood tale and adulthood and puts the tale theme to a sort of meta level.

Why did you choose the theme for the new album?

Frank: We wanted to work on something bigger and we like to tell stories.

Niklas: We always loved telling stories. Furthermore, fairytales have a long tradition in Europe. Any child knows the brothers Grimm, though most kids won’t know the tales we tell.

The sound of the new album made me surprised because your past albums have many lyrical melodies in blackened death-metal sounds but those lyricism replaced by eeriness and modernism in the new album. Why did you make your new music into the whole new level?

Niklas: Well, to me, the term “modern” is more associated with bands like Sonic Syndicate or all that Hardcore/Metal crossover stuff, super fat guitars, synthetic drums, Eurodance keys, all this crap. We did a pretty old school album this time. No triggers, no bullshit. Sounds from a real piano. Lots of weird guitar-sounds that might seem like keyboards, but are guitar pedals instead, which make it sound very organic. For the rhythm guitars, we chose an authentic guitar sound. So, all in all, in my opinion the record is less modern than anything we did before.

The cover-art looks very impressive and it gives me a lot of imaginations for the creepy stories of the album. Does it just represent stories of every single song in the album?

Niklas: The front cover is visualizing the “armless maiden”-story, the alternate cover in the booklet or gatefold is based on “father death”.

Niklas: Talissa Mehringer from Berlin did it. She is a great artist and wonderful person. 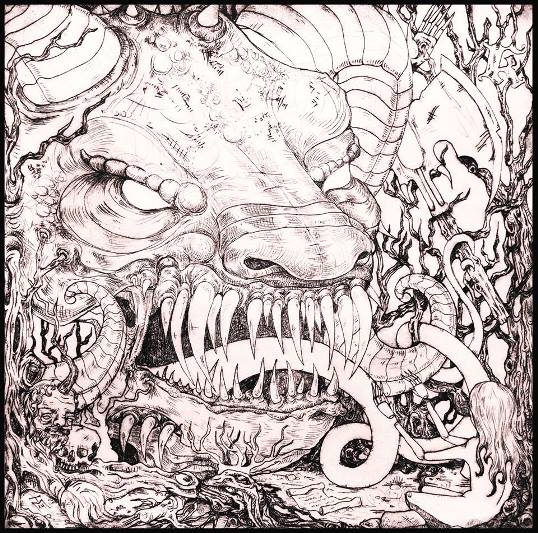 When I opened the booklet of the album, I found the second half is placed to upside-down. Why did you do like that?

Frank: Because, as Niklas said, the whole project has been split in two from the very beginning. Both parts, Grimm I: The Armless Maiden and Grimm II: Thoughts of the Sore, have got their own cover, so they meet in the middle of the booklet. The artwork just another creative playground for us, as we always put much effort into every part of a release, including the booklet.

Did you spend enough time for song writing?

Niklas: Obviously yes. It is a fucking good record. There is nothing I would change.

How about the recording, mixing and mastering process?

Niklas: We have worked with Andreas Funke again, as we always do. He knows our sound and he knows what we want. It was hard work though, because we tried to make the record sound as natural as possible, without having it sound like crap.

The whole album sounds absolutely theatrical that the massive vocals lead us into the fantastical spooky realm as story teller. Did you try it consciously in the recordings?

Niklas: Yeah, for sure. Of course we spent time on planning how the vocals sound. It was not a happy accident. It’s just what we wanted it to be.

How did you manage the impressive orchestrations?

Frank: With a wand. And some buttons. Joking aside we spent much time in the studio with our producer Andi experimenting with the sound.

A couple of tunes from the album have less speed with hallucinatory guitars, for example: “Queen of Sylvan Lands”. How did you come up with the idea of the sound?

Frank: Cool that you mention that song. It’s somehow unnoticed in all the reviews. This song is very special because of the chilled guitar sound that later bursts into an almost cheesy heavy metal solo. And we have the triplet rhythm and bluesy piano. It’s kind of a metal swing.

Niklas: Well it came naturally. I love Blues Rock and it inspired me.

Could you give a short description for each of the songs?

Wither Away
Frank: Hey, isn’t describing the songs YOUR job? I always find it interesting when other people describe our music and use words that I would never have had associated with it. Well, Wither Away was the best way to start the album because it has this “story teller growl rap intro”, a furious start and parts, where the drums don’t really give a beat but a basis for the story teller. Here we get into the whole scenario.
All The World But One
Niklas: My favorite live-song. Is especially love the monotony in the end.
Ruins
Niklas: Blast beat Inferno.
7 Years
Niklas: A Post-rock track. No vocals, but lovely guitar leads.
Queen Of Sylvan Lands
Frank: For me by far the track with the greatest unique characteristic Niklas came along with. The lyrics are so incredibly corny. Niklas just wrote them down, we read them again and again and asked ourselves if we could put this kind of love story into a metal song. But it fits perfectly. Queen is the conclusion of Grimm I, it ends with a vision of romance, a promise of hope, a “Maybe they will live happily ever after”.
Lords
Frank: Relating to the concept Lords docks on to Queen of Sylvan Lands: No, they are not living happily ever after. Lords is about death and how to live with it.
Voids
Frank: Voids is the only song that doesn’t set to music a concrete tale. It’s about disillusion, a feeling that is very real. And it refers to a quote of poet Friedrich Schiller: “Deeper meaning resides in the fairy tales told to me in my childhood than in any truth that is taught in life.”
Shuttered
Niklas: Blast beat Inferno part II
Helix
Niklas: To me, this is the strangest song we ever recorded. Again, I love its monotony and the saxophone solo in the end.

Niklas: ‘cuz it’s an awesome song. Music and atmosphere are almost cinematic, so it fits perfectly.

When and where did you do the video shooting?

Niklas: We shot in May or April in a forest near our hometown Wesel.

The video represent the brutal story of the song in an abstract way. That’s very impressive and actually I was a lil bit relieved there’s no dreadful scene obviously like the song tells but it’s creepy enough anyway. How did you come up the fabulous idea?

Niklas: We had an intense cooperation with our director, and together we developed the ideas. It was not easy to plan anything, because we were pretty broke after all the musical production.

You guys less appear in the video but it seems you needed huge efforts for getting such a complicated make-up. Which part did you act out in the video?

Niklas: No, it was easy. It’s mud and color. That’s it. We represent the spirit of nature, or the spirit of the forest. We look evil, but we do not actually harm her.

By the way, how was the album release show? Did you have a blast there?

Frank: Er, yeah, one or two. This show was madness. We had 40°, everybody was hanging out lazily and only die-hard fans came to the gig. It was so hot that we drank alcohol-free beer before the show – against our habits. It was by far too hot which turned the whole thing into a sweaty, exhausting trip. Really intense.

Which setlist did you play? I’m just curious about it because of the concept album, if you played the whole album in order or not.

Frank: We use to play songs from the Grimm I part in a row. The Grimm II-material like “Lords” can stand alone, so we combine it with tracks like our 2012-single “Open Wounds” or the concept part from N.O.A.H.

Well, I’d like you to introduce the current lineup to new fans, please?

Frank: The current lineup is the old lineup: We are Niklas, Chris, Oli, Hannes and Frank, hello. Some of us have been friends for a lifetime, we have been KadavriK since 2003 and we will be KadavriK as long as grass shall grow and water run. We are no rock stars and you don’t need to be our “fan”, but feel free to enjoy our music and buy a record if you want.

Who founded the band?

Niklas: We were like 16 years old and simply wanted to be in a band. We did not even have instruments back then. We first founded KadavriK, then bought equipment, and then learned to play.

Frank: I only remember there were these guys in my school class constantly asking me if I wanted to be their drummer. I guess it was just a joke, but I bought a drum set and got as a rehearsal room in a youth centre. We were really crappy, but we’ve developed into something as you can hear.

Could you tell us about your career as KADAVRIK so far?

Frank: “Career” perhaps is the wrong term as we don’t make any money with the band. Hell, we lose a lot of it. KadavriK is a love story, including the recording of four studio albums, countless shows, flying high, falling deep and touring with Napalm Death, Graveworm and Gorgoroth. Here we are, broke, still underground, but freed from constraints and curious what the next period of creative work will bring.

So, do you have any plan for tours associated with GRIMM I&II?

Niklas: We keep our eyes open. We love touring, but we will not take any option there is. Without a good package of bands, without having a good slot in the billing, and without any financial support, touring is like burning money.

Get KADAVRIK merch on Skull Merch 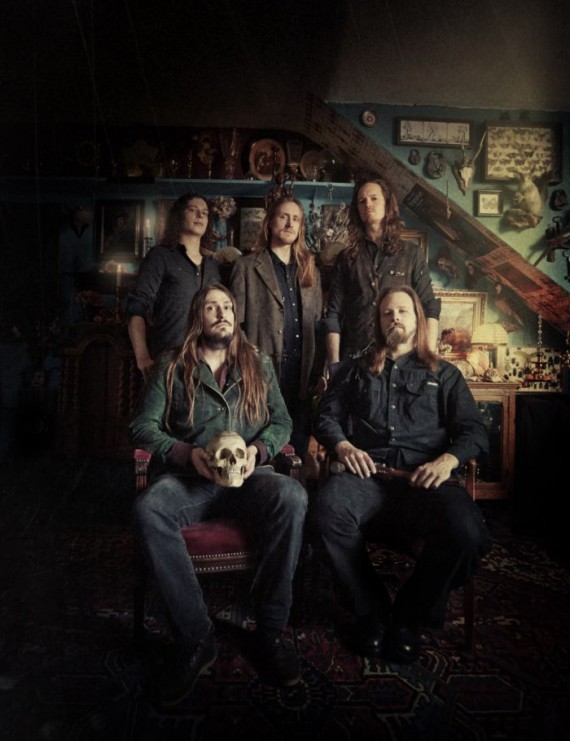