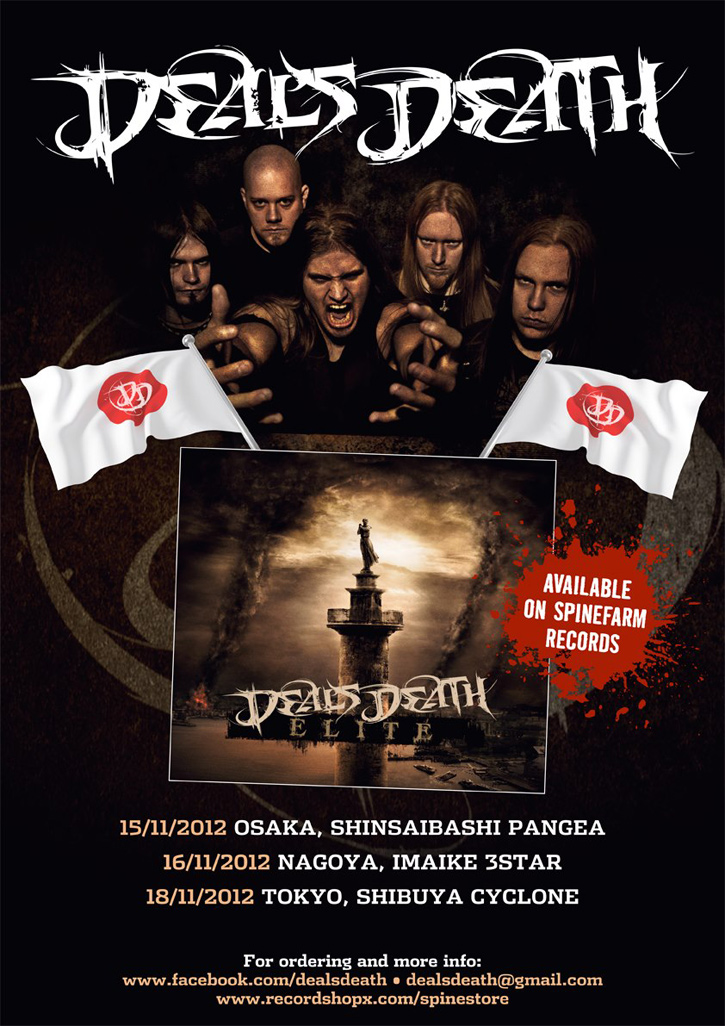 First of all, I want to say congratulations for your brilliant album “Elite” which is the best album in 2012 for me and I’m sure for a lot of metal lovers in the world! I should say Japanese metalheads are very lucky for having a chance to be the witnesses for your shows in such an early time! Well, how was your first trip to Japan?

Erik: First of all, thank you for everything you’ve done for the tour! It wouldn’t have been the same without your work! Our first trip to Japan was out of this world! Sure, we had expectations. But this!? It was like stepping into a video game! And all the people we met were so nice. I remember when we were at Nagoya castle and an old lady asks us where we are from. “Sweden and England” we replied. After that she says “Thank you for coming to our country” “Nice to have you here”. I just wanted to hug her… I didn’t! But I wanted to. You never see that kind of thing where we´re from.

As far as I know, you had a bit time to see some famous places in Tokyo and Nagoya, right?Could you tell me your impressions of Japanese cities you saw?

Erik: As I said, it was like stepping into a video game. Lights and sounds everywhere! The busiest street in Gothenburg would still have less people than the slowest street in Tokyo! And all these tall buildings are so awesome! I could keep watching my photos and videos from the whole trip forever.

How was the very first show in Japan at PANGEA, Osaka?

Erik: A bit nervous, in a good way. First show on a tour is always like that. But we had a good show and it hit us that the crowd was so wild! Where we usually play, people like standing still with their arms crossed and maybe a beer in the other hand. In Osaka there were moshpits and we even got a proper wall of death!

How was your condition at each show on this tour? I guess, moving between Tokyo and Osaka was long and tough for you … or not?

Erik: Yes, it was rough. Half the band needed to pick up Bloodshot Dawn from the airport that morning and after that travel to Osaka. So it took about 10-11 hours cramped in a small van with 9 other dudes. You can figure out the rest… haha.

I saw the show in Tokyo. Honestly, that was one of the most energetic and powerful live performances I’ve ever experienced in my metal life! Do you have any important point to play such an enormous live performance?

Erik: Thank you! We had a good show as well! Really good crowd! We really try to play “big shows” even if the venues are small. It fits our music and it goes hand in hand with how we want to project ourselves. Powerful and aggressive. Controlled anger so to speak.

You have played the bonus tracks for Japan from the album Elite – Internal Demons and Truthful Profession on this tour, that was a totally happy surprise for us! Are they a usual feature of your performance?

Erik: We usually play those tracks live. They are big and energetic and helps to create a varied set-list. I personally chose those 2 tracks to be added on the Japanese edition of Elite. Turns out it was a good idea :)

You gave us one more happy surprised moment: Josh from BLOODSHOT DAWN joined the band for one song on vocals, without his axe. The overwhelming killer duet was absolutely brilliant. Who’s idea was it?

Erik: Haha, yes. That was pretty cool. Josh is an amazing performer and artist. We talked a bit about doing something special for the last show. So Olle and Josh took the matter into own hands and pulled it off.

Your songs are great for headbang and sing along. I really enjoyed a feeling of unity between the band and us through the show. Did you feel any difference between Japanese metalheads and the people in the other countries?

Erik: Thank you! That is actually something we strive for whilst writing the songs. Nice to hear it's working. I always want a close connection to the crowd, even if it's a big festival stage and we are a few feet away from the sea of people. The enenrgy should be flowing through the entire crowd and create unity. The Japanese crowds were very different to what we have played in front of before. They seemed really happy to see us and it got us all pumped!

By the way, did you enjoy the signing session/meet and greet at GODZ in Tokyo?

Erik: Oh yes, that was something! To go in there and get greeted with applause and cheering was unreal. And to meet the people who had travelled over a 100 miles just to meet us and had made handmade gifts for us..oh man. Very humbeling to say the least. Im a proud wearer of the GODZ T-shirt here in Sweden. :)

In my opinion, after I have experienced your incredible performance in Tokyo, the band could play even at LOUD PARK in Japan for sure! Do you already have any next aspiration towards Japan?

Erik: LOUD PARK would be amazing. I saw a clip from when our good friends in AMARANTHE played there and it was mind-blowing. Really hope to play there someday. I can say that we want to come back to Japan for sure! We hope to grow larger and be able to play for more people and have larger signing sessions and a proper after-party or something like that. To create a closer bond with the Japanese metalheads. We salute you!

Thank you so much for the interview and the incredible shows in Japan! Hope you guys come back here next year! We are already eager for that!

The live photos at Shibuya Cyclone by METAL SHIP