The Russian Technical Melodeath force is back! Sunless Rise Interview

The time has come. Sunless Rise the technical modern melodic death metal force from Russia finally broke the silence and shouted out about their upcoming full-length. Before they reveal details of the new album, I decided to do this interview with them quickly. Actually, I can say it's a big deal for me like ‘finally one of my dreams came true’. So I’m honored to ask the band about their amazing Promo EP which was released in 2009.

Hello guys. I’m very glad to know that you guys finally became fully active in the music scene! Many fans of yours must be excited about it. How have you been since you released the promo EP in 2009? You had been almost silent for a long time, right?

Greetings to everyone who knows and appreciates our music! We are happy ourselves that we’ve managed to harness our willpower to move forward, that we’ve found time, nerve and sources to finally record our first full-length. It’s nearly finished and will be released this autumn. The work started right after “Promo 2009” was out, but we’ve met many circumstances, most notable of which was the band’s crucial decision to move from Tobolsk to Saint Petersburg in 2010. But - even in this period of moving, searching for jobs, setting up our everyday lives and lineup changes - we’ve kept working on this album, slowly but feeling that we’re on the right track. So, we were writing some new tracks, reworking the old ones, made three videos (including a play-through one), forging the album’s concept, orchestration and lyrics. Another important thing that took our toll was our personal development, we were growing up as musicians and our views of life and art were also progressing.

I know you released the brilliant play through video in 2013 but still had not believed you were active at that time. Why did you release the video at that timing?

In early autumn of 2013 after yet another lineup change we’ve started again, and to show our fans that the band is still active we’ve made two music videos (you will be able to watch them closer to the album’s release date) and one play-through video (you can find it on YouTube). The latter was made especially to introduce a new band member, Vadim Wayland who unfortunately had to leave the band later. Such a great guy but no haps.

Why did you choose “Nothing To Save” for the play through? I mean once you filmed the song in the past as official music clip, right?

“Nothing To Save” was our flagship song, fans loved it (there are even some fan cover versions on the Internet) - so we’ve never second guessed about which song to choose for a music video. It was made in support of “Promo 2009” CD, independently and in our own expense. At this point in time it doesn’t bring us any pleasant feelings, except perhaps some sweet memories. It’s quality is awful. But it was the best we could produce at the time.

“Nothing To Save” is a perfect kick-starter for your promo EP with an overwhelming intro anyway. Could you tell us details of songs from the EP?

“Nothing To Save” is truly unique for Sunless Rise for it was the first track that we’ve ever written, and it was done at a record pace - in one night (it takes at least a month for any Sunless Rise track to be finished). It is also special because it sounds so summed up and lapidary, absolutely comprehensible. I guess we’ve managed to express the very soul of our music in just three minutes.

Speaking of other tracks on “Promo 2009” I can tell you that they serve as a preview for the upcoming full-length and it’s concept. Like some kind of trailer.
And the concept of the upcoming album is a certain story, so the songs are written and put in right order to tell this story to a listener. This story is about a man of consequence, a big shot, whose actions have caused huge global climate changes, so all the living things are to be extinguished. In a state of shock of what is about to happen he drives away from the big city leaving his family and all the people he knew, without warning. Suddenly he gets into some weird reality, where he passes lots of terrible ordeals. The main point that we’re trying to make with this story (and the whole album) is that this technocratic path that mankind chose to take is a dead-end. Instead of developing our potentials given by Nature we are more and more relying on tech “crutches” of different kinds. We become some sort of civilized cripples by losing touch with our planet and failing to live in harmony with it.

The EP has a fabulous sound production! Everything sounds absolutely professional! So, I wonder if you have ever released it as physical disc before, or not?

The inputs for “Promo 2009” were quite modest but the sound turned out to be really outstanding. That recording was mixed by guys from Anthropocide Studios (Belarus) who were just starting up at that point, so we’ve had a special deal. We’re planning to mix the full-length there too.

“Promo 2009” was independently released as a limited edition of 300 CD’s. They were sold out, all inside Russia, several CD’s were sent abroad to radio stations, record labels and magazines as promo copies. There are still a couple of dozens of them left so we’ve decided to sell the rest to our foreign fans. The problem is there are many times more people willing to buy those CD’s than copies left. We’re still trying to figure out the best way to distribute them. So, in case you’re one of those willing to have “Promo 2009” CD in your collection - keep checking our Facebook page for updates.

Could you tell us about metal heroes for you? Which bands have you been affected for your music?

Every member of Sunless Rise is influenced by many kinds of different music, we were never limiting ourselves at all with that, through all our lives. From classical to electronic, from Dream Theater to Nile. There are no bad music genres. There are good, bad and mediocre composers and musicians. And when you’re moving in these circles being a professional yourself, you stop reckoning other musicians as heroes or idols. More like colleagues whose art you tend to love or criticize. Like, “these guys are really good at arrangements”, or “wow, these guys are so technical”, or “I wish we were that good at promoting our live shows”. Some musicians are really creative and it’s exciting to follow them. But they’re definitely not the majority.

How is the environment for the metal scene in Russia? Is there any big obstacle to keep activating as metal band?

Metal scene is alive and well in Russia, actually things start to get better these days, although it depends on what we define as Metal scene. Most of authentic Metal bands don’t pack big venues anymore and their popularity seems like fading. Youth, as always, is following the latest trends, so there’s always some cheesy, watered down bands on the rise of fame. That’s absolutely normal because metalheads are dedicated to Metal while trendies are dedicated to some latest fashion. There are too many subgenres, everything is segmented. Like metalcore, deathcore and other hyped music (that actually has little in common with neither Metal nor Hardcore). Most Russian musicians who try to jump on this bandwagon rarely even learn how to play, they are too busy being rock superstars right away. Anyway, there are also lots of fans who dig some really good Metal but mostly enjoy listening to it at home, rarely attending gigs. They know that true Metal was, is and will be sincere, and this rule is eternal.

It’s not that hard to keep your band going in case you just love playing music. What makes a much harder task is getting your music heard around the globe, and in this case you have to firmly believe in yourself and work very very hard.

Well, you guys shouted out about a new full-length lately, didn’t you? I am very excited about it. Did you already finish writing songs for the new full-length?

Vast majority of work has been done pretty long ago. All the instrumental parts are already recorded, and now we’re finishing with the vocals, and also are working on some arrangements and electronic parts. We’ll do our best to have it mixed in August, so the album would be released in late autumn.

When will you start hitting a recording studio?

We’re planning to get back in studio right after the album’s release. We’ve got to produce some new Sunless Rise material which is almost ready to be recorded. It’s gonna be a single with two additional tracks, and they will sound quite refreshing yet distinctive. You’ll be surprised.

Back in 2006, how did the band get formed? Who founded the band?

Alex Becker, Sergey Shulzhenko and Eugeny Kasitsyn were the original lineup, a couple of years later Alexey Mallovski joined the band as a drummer and another year later we’ve added Alexander Cherepanov on vocals. It’s his growl you can hear on “Promo 2009”, he also works with us on the full-length recording. Before Sunless Rise we were playing in local bands and already had 5 to 7 years of experience before graduating high school. In 2006 we were 16-18 years old but quite ambitious (still are!), we were dreaming to create something big, setting the bar high for ourselves right from the start and intending to fight for our goal tooth and nail. It was a flash of pure inspiration, it kept us going and overcoming unforeseen difficulties. We were living in a small Siberian town and it was very hard to find musicians able to answer our purpose, for example, our drummer had to travel 1000 kilometers to get to our rehearsal place.

Could you tell us about the current lineup of the band? Have you ever made any member’s replacement in these past years?

Yes, we’ve had constant but inessential lineup changes, but the core members are still the same. Some members who left were getting back - like our Eugeny. Our current singer Kirill Ershov is also from Siberia, we were neighbors and we know him for years.

Have you played concerts before?

Our first gig took place in autumn of 2008 and it happened in Tver, a small city near Moscow. To make our first appearance on stage we’ve travelled more than 2000 kilometers! We’ve played quite a lot of shows in 2009, and the last two gigs happened in the end of 2011, in our native Siberia.

This is the last question this time. Are you guys now 100% active as Sunless Rise?

During that period of hiatus we could shelve our project like most bands in this situation do - they bury their dream after moving into adulthood. There were moments we weren’t sure we were capable to continue. But despise all those hardships our motivation grew stronger. We can see clearly now that music is something our life isn’t full without. So, our music gives us that very feeling of meaningfulness of existence, it keeps educating and inspiring both us and our listeners.

We are really looking forward to listening to your new songs! See you guys again very soon with another interview about the new album. Keep up your great job. Cheers!

You can check their brilliant music on Sunless Rise Bandcamp. It's also available at iTunes Store. Be sure to buy it and support them if you like their music. 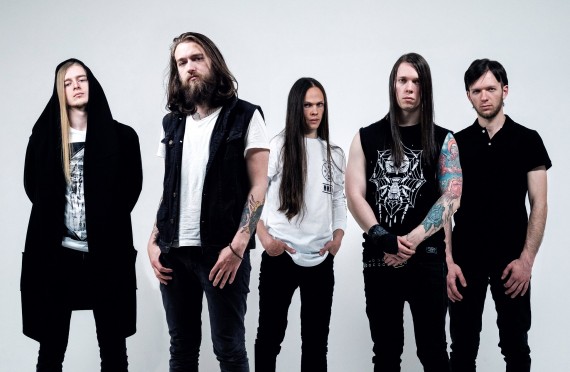