Rise To Fall Interview about the third album “END VS BEGINNING”

Finally I got a chance to have an interview with Rise To Fall the modern extreme metal force from Spain which released their third full-length “END VS BEGINNING” this year. As an early fan of them, I was curious about their thoughts for their music and Japan.

Hi there! It’s been a long time since Rise To Fall did a Japan tour with the debut album “Restore The Balance”. We miss you guys. I hope the result of the latest crowdfunding would make something forward for your return to Japan. How are you feeling about the result of the Indiegogo campaign? Do you think that was a great success?

Well, we´ve got half of the amount we were asking for, so we wouldn´t say it´s been a great success. Nevertheless, we are very happy and very very grateful with all the people who took part in it.

Do you still vividly remember your experiences in Japan though the tour in early 2011?

Of course, we will never forget that tour ! it was one of the best experiences in our lives. Japanese people were very kind and full of energy in the shows. Simply amazing.

Well, congratulations for the release of the fabulous new full-length “END VS BEGINNING”! How long did you spend your time and efforts for the new album?

It´s been quite a long process, much longer than we expected. Almost a year of composition, not fully dedicated to it, I mean we all have different jobs and it´s not always easy to meet because of the different timetables. On the other hand, we didn´t want to force the inspiration, no hurries, slowly but surely. The recording process it was pretty long too, it took us several months to record the album. We did a lot of pauses because of timetable incompatibilities and other issues,. We recorded some stuff in two weeks and then we stopped for a month and things like this. The mixing and mastering process wasn´t short either, so as you can see, we´ve been a long time focused on this project and we were really craving to see this album out. We hope the wait was worth it. 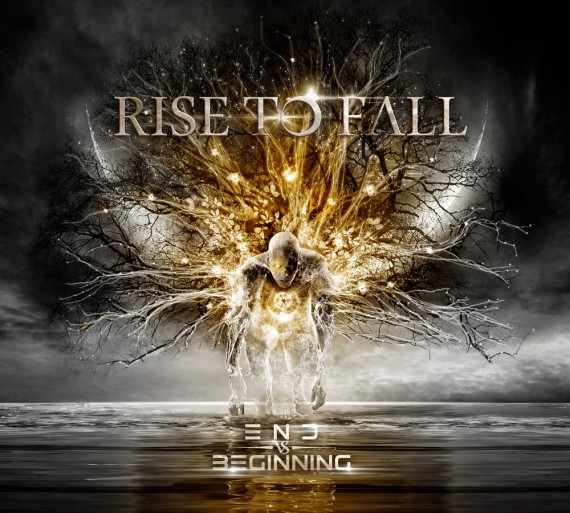 In my personal opinion, “Restore The Balance” has a big impact with strong and tight sounds and very impressive melodies. My impression of the second album “Defying The Gods” was more electric and modern than the first one. And the “End vs Beginning” you finally released this month has a strong case in its music based on your big confidence for what you do as band and it sounds hugest among those releases. What do you think is the main difference between “End vs Beginning” and the past albums?

First of all, we are glad to hear that this album sounds better than the others. Improving is always our aim, that is what we look for every time we face a new challenge. We tried to do better songs for this new album, with a better execution and a better sound. Although we have been faithful to our style, a combination of force and melody, we tried to do different and fresh songs, always searching for different atmospheres in order to transmit the audience a wide range of feelings. We feel this album is more mature

The new album has the fantastic sound production again. Could you introduce us your album producer?

Pedro Monge (Chromaticity studios, Bilbao) was the main producer. We couldn´t be happier with him. He helped us a lot and pushed us to the limit in order to get the best results. Then Jacob Hansen (Hansen Studios, Denmark) did his magic to take the best possible sound.

In general, many young bands struggle to get a first-class sound production and give it up but you kept winning it from the start. Do you have an obvious obsessiveness about it?

Is it so evident ? lol. Yes, as we told you before we always try to improve and achieve a powerful sound, it has always been one of our main objectives . besides, we never look for the same sound, we think each album should have its own personality.

The album art for “End vs Beginning” looks super brilliant and has a universal and spiritual felling like the arts from past albums. Who did manage it?

After seeing the final result of the Defying the Gods cover, I (Dalay) automatically visualized the cover of the 3rd album and at that moment I decided that I wanted to be part of it. I can reveal a secret now and tell you that I´m the “waterman” of the album cover. I shaved my head and my beard for the occasion and I went into a swimming pool for more than two hours until we had the right picture. Then Josu Torrealday, our photographer and graphic designer, used his magic wand and did what you can see now.

Artworks for all of your albums have oodles in common. Did you make it as series?

Yes, the three albums are very conceptual and they have a hidden story in common. It was back in 2009, before the release of “ Restore the Balance”, when I (Dalay) decided I wanted to do I kind of trilogy. I knew we would release three albums and I felt they had to be connected somehow. I made that prediction six years ago and today I can see that it has come true. 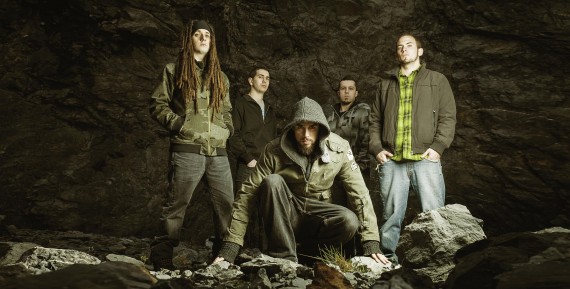 Let’s move into the story of the album “End vs Beginning”.An opener is the title track, and I had to be grinning when I found the words “restore the balance” in its lyrics :) Did you do it deliberately like homage for the first album?

Yes, of course I did it deliberately. There are more than one little homages like this along the album. In the song “Parasites” my last words are “defying all the gods” with reference to our second album, and in the same song I use the words “Fragments of degeneration”, in honor to our friends in Disarmonia Mundi. I wanted this album to be special in many ways, and this is one of them.

You are right, the three songs have a strong connection. Aimar (ex- No drama) performs the guest vocals in these three songs, he is a good friend of the band and an awesome singer, so we always want to have him in our albums. The lyrics of the three songs are linked too, and they talk about personal experiences we (Aimar and Dalay) have lived together.

Anyway, I always feel a lot of spiritual elements in your lyrical universe. No matter it’s about awakening, distress, inner fight or humanity, you are good at expressing it in the cosmic dimension. Do you basically get hints for those lyrics from your daily life?

Thank you for the compliment, I really appreciate it. Yes, I could say I find inspiration in what I see, in what I discover in my personal life and especially in what I found in the global life this world is living. Sometimes inspiration comes from tragic facts and sources. This world is far from been just or solidary, governments and big corporations give priority to profits rather than human rights, we use technology to destroy and contaminate, wars still kill thousands of people, we eat poisoned food, we wear clothes and use phones and computers made by slaves… the list is infinite…so I could be writing about all this things eternally. I´m obsessed with the human mind, with the human behavior. What does people act like this ?

The guitar works are one of the highlights in the album “End vs Beginning”. It stands more vivid and dramatic than past albums and I love it. Do you have your favorite guitar solo in the album, Hugo?

For this album I (Hugo) worked with Pedro J Monge as producer, he is an amazing guitarist and he helped me a lot. I think my favourite guitar solo is the one of The Threshold, but I have to say I like all the solos on the album.

Xabi’s intensive and tight drumming is brilliant as usual. Did you try anything experimental in the album, Xabi?

Yes, I always try to do different things in every album. I listened to many different music styles in order to bring something fresh to the new songs. I´ve made things I´ve never done before and I´m really happy with the final result.

Fifteen songs in an album seem a bit occupied, doesn’t it? I love every single song in it though, haha. How many songs did you write for the album actually?

We are very happy to hear you like all the songs. Actually we recorded 17 songs (15 with vocals), so somewhere in the way the idea of making a double album appeared…but then we decided that 12 songs was the perfect track number for an album. We tried to discard some songs but after some weeks of discussion, we realized that we couldn´t rule out any song, so finally we decided 15 would be the perfect number.

The latest music video from the new album is brilliant as well! Why did you choose “Threshold” for the first video of the album?

Well, to be honest that was a hard decision to make too. In the previous albums the first single was pretty clear since the very beginning, but this time each one had his favorite song and we could not agree. Finally, we felt that “The Threshold”, being a powerful and direct song, gathered all the elements we wanted to show.

Where did you film it?

It was recorded in Bilbao, in a cultural center.

By the way, how was the album release show in your local city Bilbao?

Simply awesome! It is hard to find the words to describe this moment. For us the release show is one of the most special moments. The venue was full of good and powerful energy, unforgettable.

Did your families and buddies from bands in your local town join the celebration?

Sure they did. That is one of the things that makes this night so exceptional. It is great to be able to share those outstanding moments with your relatives and friends. When we are touring we don´t have the chance to see them in our shows, so this is the time we can enjoy on stage seeing those who are closer to us.

Bilbao also has other wonderful metal bands like Nodrama and The Descent. Do you have your favorite band in your city?

Yesss, why not !! The Descent, Late to Scream (very young and talented boys)… Aimar (ex-Nodrama) has a new promising band called The Flying Scarecrow. There are a lot of good bands here.

What is your next goal so far?

Well, for the moment we have recorded a video clip (The threshold) and we´ve made a lot of new merchandise, but we would like to underline that our main goal is to tour as much as possible. We will announce some big news very soon.

Could you give some message to Rise To Fall fans in Japan?

Touring Japan was incredible, totally epic. We are really looking forward to go back there. Actually, we tried to arrange a tour with this new album, but unfortunately the final answer was no. We were told that after the tsunami in 2011, labels and promoters don´t invest in non-famous foreign bands. We were really sad to hear that. Anyway, we can assure our fans that we will keep on trying and we are pretty sure that we will come back one day!! 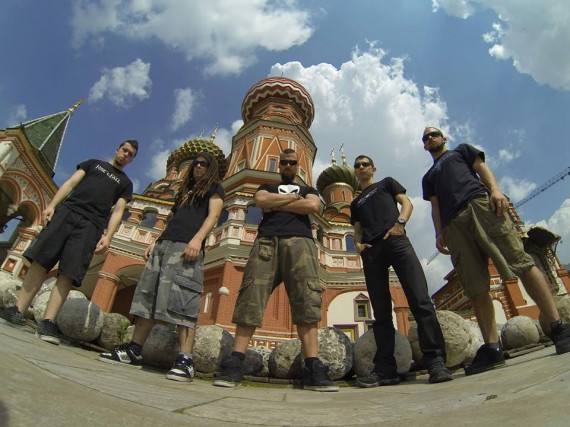