Interview with Sunless Rise about the second full length “Ultimacy”

About 4 years! It took long time a little bit but finally the second album “Ultimacy” is going to be released! Did you continue working on the album after the release of the first full-length “Unrevealed”?

SLR: The raw versions of 3 or 4 tracks were developed even before Unrevealed was released. Some tracks weren’t added to the final Ultimacy tracklist — we don’t think we’re going to release them later, it’s better to move on.

SLR: Our European tour is successfully finished. We’ve decided to treat our fans with mostly older tracks — stuff from Unrevealed plus newer singles. It was our first time playing in Europe and we knew that some people there listen to Sunless Rise since Promo 2009 (it’s ten years already, hooray!). So, we’ve played some tracks from Ultimacy, but there were more older material in our sets.

As you mentioned in one of the official statements before, we can recognize some new clean singing style in the album. Of course, we can hear the familiar cleans by Sergey and Alex(B) as well though. Is it John in charge of the new clean vocals?

SLR: Yes, the majority of vocal parts on the album were performed by John, both extreme and clean (like on two previous singles). We’ve managed to unfold John’s full vocal range and we really like how it sounds. It sounds different from older stuff, but that was the idea. We’re happy with the result, the album sounds rock-solid and more mature. More serious — and it fits the concept and the music.

It's great to hear that! In fact, you finished the new album “Ultimacy” with different members from “Unrevealed”, for example, vocals. John is such a great singer (as we already know!)! How did the replacement of members influence the new album?

SLR: The new guitarist’s name is Pavel. He had jumped on the bandwagon in the last moment but managed to work on the album and polish it.

Could you tell us little more minute about that new axe-guy: Pavel?

SLR: We know Pavel for a long time. He is a great guitarist, one of the best we know, and he’s from Siberia too. It was a surprise for us though that he listens to Sunless Rise since our first recordings. He accepted our proposition to join after giving it some thought — and it turned out just great for the album and the band.

Actually, I got surprised with the credit about Alex Becker as ‘on bass’. He was our beloved guitar player then. I wonder if he leaded guitar parts as well in the new album or not (I believe he did though!). Is the credit stands for live shows?

SLR: When Alex decided to switch to bass (after Boris had left the band) it surprised even us ourselves. But he is really good at it. Also, it wasn’t too risky because we’ve already had Pavel who re-recorded all the guitar solos and came up with some parts, enriching the album with many fresh ideas.

So, I honestly tell you about my very first impression about the new album comprehensively. Your first full-length “Unrevealed” was just like a gushing spring, and “Ultimacy” is like a stable stream. I mean there is obviously some different ‘excitement’ between “Unrevealed” and “Ultimacy”. Many songs from “Unrevealed” got its birth about 10 years ago, right? So, I guess this musical difference simply comes from a passage of time. And of course, your intelligent, elegant, sophisticated, and beautiful musical universe is still dynamically alive in “Ultimacy”. What do you explain about the musical difference between these 2 albums?

SLR: When we were writing first Sunless Rise tracks we thought that playing fast and complicated songs is the most important thing — music was like sports to us. The first album was great, but it was more like one endless crazy roller coaster. The second album is more intelligent, its tracks are more song-like, more harmonic. We’re pretty sure the third album will sound different too. Maybe we’ll manage to strike a happy medium between the previous two albums’ approaches.

Awesome! Your music always has enough technical elements and it’s combined perfectly with fabulous melodies. However, I felt like you rejected some complexity for the new album and made it tighter, heavier and darker than the first album. What’s on your mind about that?

SLR: Yes, we’ve got rid of some unnecessary complexity, that prevailed on our earlier recordings, but there are still very complicated technical solos that are on par with Unrevealed. We’ve made the album sound darker and heavier but filled with beautiful melodies and off-the-wall harmonies.

It’s a great fact that “Ultimacy” is a concept album of a new mystic exploration located in the imaginary Siberia again! Is the story of “Ultimacy” directly connected with “Unrevealed” but with a different generation and a different situation like a cycle? At least, it seems the inverted triangle symbol in the center of the cover art implies some connection with “Unrevealed”, huh?

SLR: Yes, the new album’s storyline is a ‘prequel’ to Unrevealed. The history repeats again and again, humanity degrades and comes to the boil, then the Apocalypse comes, and after that humanity is reborn again and again — until people learn something and stop choosing the path that leads to chaos and total death. So the story in Ultimacy tells of the last days before the world dies. The higher forces send a messiah in the form of an old man — an archaeologist, who researches the history of Siberia. The old man promises some secret power brokers to find a mysterious artifact that gives the power to control minds and rule the world. The artifact can be found only using a meteorite that fell into Siberian taiga, in a place named Suicide Hollow — because all the searchers who tried to get hold of the meteorite went crazy and died on their way to approach it. So, after the expedition is approved and set, the old man gathers a group of young scientists who are told that the artifact can help to decipher some secret knowledge from a lost civilization — so they can’t miss the chance to be a part of the mission (The Seekers). During all their adventures they become mentally and morally strong to survive the Apocalypse and re-start civilization. But not all of them — one girl loses herself in another reality forever forgetting who she was, and so is a guy who loves her and stays with her in some other world (Into The Nightmare and Storms Of Sorrow). Besides their main mission the Seekers manage to block the portal through which demonic forces we trying to break into our world and stop humanity from being reborn (Warden Of Grief and No Forgiveness). When they finally find the meteorite, open the passway inside a cave and get hold of the artifacts, they deal with betrayal — one of the Seekers is an agent sent by the protagonist from Unrevealed to rob the Seekers of their treasure. The guy secretly follows the expedition to the cave and murders his agent after he refuses to give him the artifact (The Clash). He locks the Seekers inside the cave where they realize the real power of the artifact — it starts the Apocalypse process. The Unrevealed protagonist gets it too late, he tries to escape but perishes with all the other human beings. The Seekers fall into anabiotic sleep that will end after the end of all living things.

Well, of course it’s just an annotation, but we hope it will help to get the main story and then find more interesting details (even some ‘easter eggs’) in lyrics. 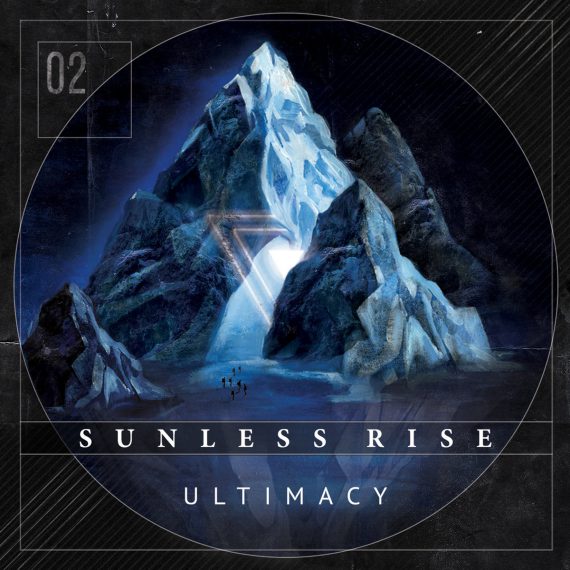 Anyway, the fantastic cover art of the album gives a big excitement for starting the new adventure! It shows some image of the second track “The Seekers”, right? And who organized the art?

SLR: Yes, it really illustrates The Seekers track — or the part of the story between The Prophecy and The Seekers. The idea was collective and the art was done by our old-time friend and collaborator Nadya. She did all the cover arts for our albums and singles, she also designs our merch and social media accounts. We are very happy to work with an artists who totally understands our ideas, she never fails to surprise us with her great talent.

As you mentioned above, the concept is absolutely fantasticas well! I love the whole lyrics! Like once you succeeded with “Unrevealed”, “Ultimacy” also has vivid images of its story and I feel like I’m watching a sci-fi adventure movie about demolition and purification of the world in a huge scale, like a modern version of Noah’s ark! Did you have continuous wars in the world or the serious climate change of our one and only planet earth in mind to write down the story of the album?

SLR: Of course, the legend of Noah’s ark is one of the influences — but there are many of them, and they mix with our own ideas, views and examinations. We see that the world is going closer and closer to self-destruction and we must do something about it. The people are self-destructive by nature and they do not want to learn. People destroy everything they touch to become rich, to become masters of others — it kills our chances to survive. We want to express it in our music to share our emotions with listeners. Hope our music can help people to feel stronger and renew their vigour. The complexity or speed, even the lyrics don’t matter as much as what you feel while you listen to this music.

Yeah, you guys really got to the point. I always love your philosophical point of view. Thank you so much! 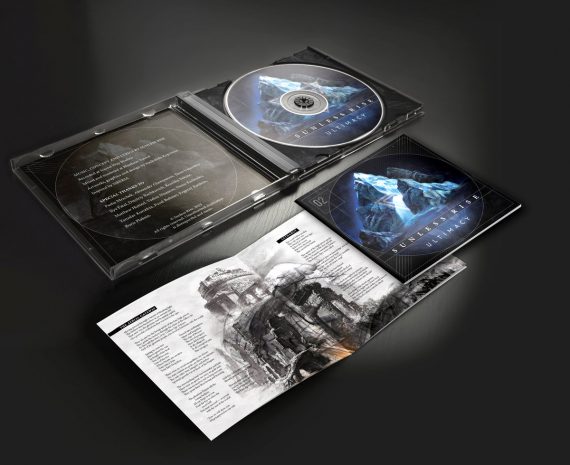 When I listened to the entire "Ultimacy" for the first time was late October. I was excited and relieved with the fact that Sunless Rise didn't waste their time even a bit after the dramatic renascence and success with the first full-length "Unrevealed".

"Ultimacy" is the eagerly-awaited sequel to "Unrevealed" as a conceptional perspective but its sound is obviously different from their early era. It has tighter, darker, heavier and deeper texture than their past releases. It fulfills your intelligential appetite rather than your impulsive desire yet there are blast-beats and a lot of remarkable technical plays!

Moreover, they got a great weapon this time: John, as you already know, he did a lot of fantastic jobs these past years through concerts and latest stand-alone tracks. And then finally he had a great role in the second full-length "Ultimacy" not only with his growls but also clean vocals.

Since I showed my big respects to the brilliant story-line of the album in my interview questions, I omit mentioning about it here.

All I can say about their new album is, use your five senses with full-force to enjoy their music with its depth and let your neurons carrying the intellectual satisfaction into your body and soul!

Check the lyrics of "Ultimacy" on Lyrics Library here!