Hell yeah! I’m happy to be a supporter for this kick-ass blackened death metal band  Bleeding Red. They are just working hard for their upcoming full-length album and Timo the singer/guitarist from the band brought me those impressive studio reports from Studio 141. Here we go!

Timo: After numerous sessions recording the rough versions of our songs at Michael's house it had finally begun: I went to Studio 141 to transfer our 60 minutes of mixes to Roger Grüninger's system. I felt at home again in the studio immediately – just like it was two years ago when we recorded the demo. After 6 hours of analyzing the stuff it became clear that the album is going to kick ass! 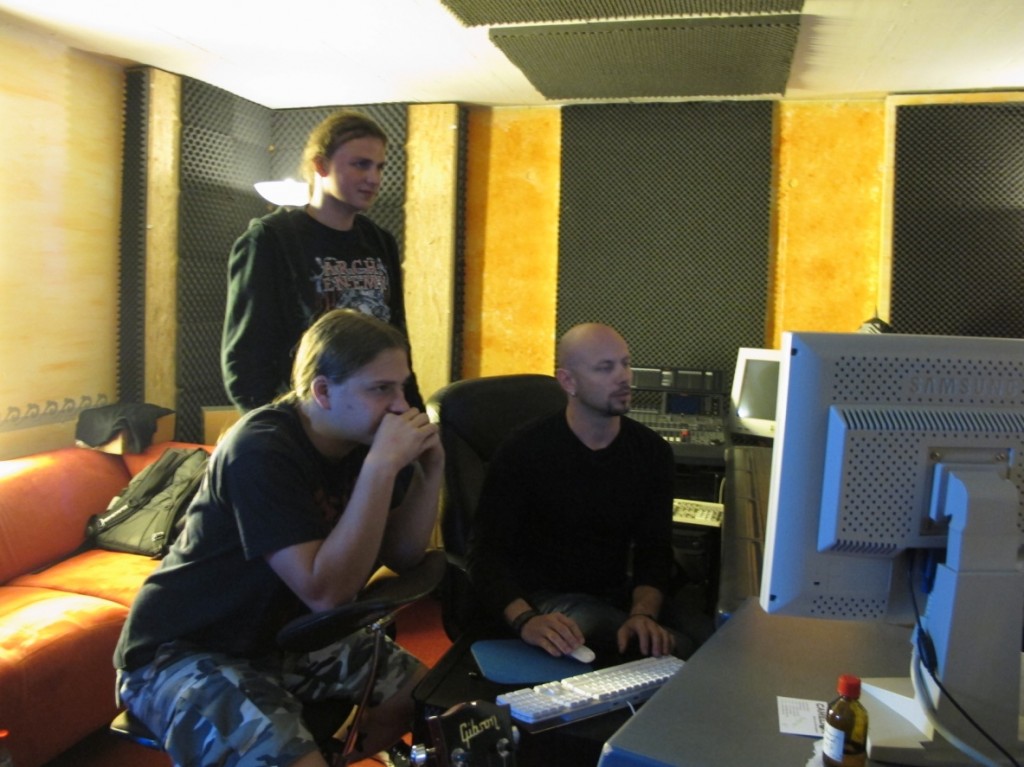 One last question for this day was to be cleared: What about the song that hasn't got lyrics yet? Are we gonna record it at all and hope that I'm gonna write something good enough in the short time left? So I showed the instrumental version to Roger and he was stunned – of course the song has to make it to the album! So our mission is to write some fuckin' good lyrics for it while producing the rest of the songs! Oh yeah!

Timo: Not knowing what we were going to do today I drove to the studio. I took some new strings and stuff with me but the plan had been something else: We decided to edit the songs beforehand, so we won't spend much effort to record parts which wouldn't stay in the song, anyway. (Note: Yes, sometimes, the songs contain parts which have to be kick- ed out in order to enhance the song. This happens to the most experienced bands ;)). 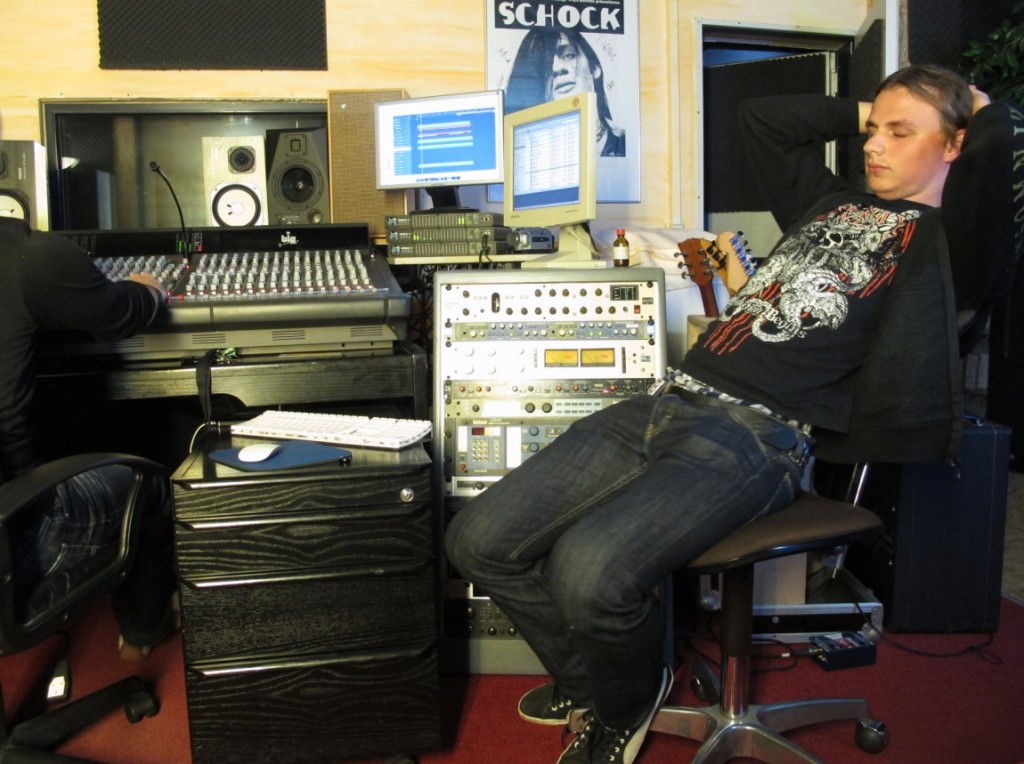 Although I was already used to this part of the recordings, once again it sometimes hurt and I almost got dizzy watching our producer Roger experimenting around with (major) parts of the songs! All I could think of during most of the time was „Damn, I need some beer!“. But after working together for another 6 hours on two songs (Frequencies + Goddess of Black) and after Michael had joined, too, we found ourselves a great way of combining the three opinions to songs that will – again – kick ass!

Timo: After a week of editing the song structures and drums, the guitar recordings finally began today! I had chosen the newest song (the one without lyrics) to start with, in order to already manifest it! This means, I have to work on the lyrics. Damn, I need pressure in order to work best. But that's how it is! So after setting up the guitar and the right amp, we found out that the distortion pedal needed a new battery. 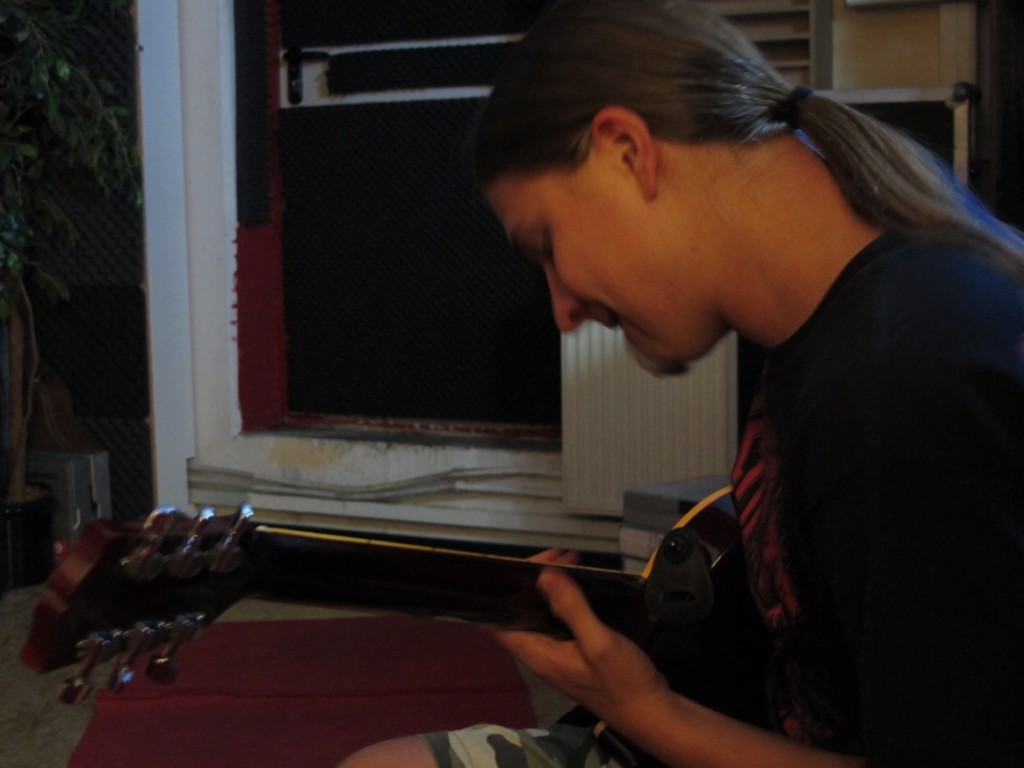 No problem, I'll just quickly get a new one. Big mistake! After i drove to a little photo shop in town, I came back with the battery, installed it, set it all up and: No sound. Did i fuck up the pedal now?? No, but the fuckin' battery was empty! „What?? I had just bought it. Ok, just keep cool, drive to the shop again, get another one.“ He took back the battery, tested it – empty. A packed battery, fuckin' empty...So can I just get another one? Of course not, it was his last one. Got the money back and had to drive to a further away supermarket with a long queue of people at the end. „Man, this shit has to stop!“.....Soooo after a stressful time I finally recorded a good 2/3 of the song and left the studio at about ten. On my ride home – it was dark and lonely – I also got a rough idea for the still missing lyrics. Let's see! 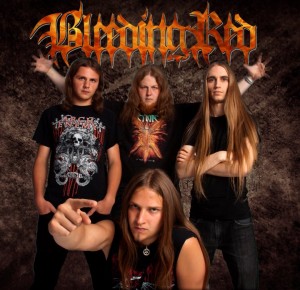 Sounds tough about their recording stuff but every recording is just like that kinda hard task, huh? *grin*

Okay, to be continued in my next blog!