Trick Or Treat – “Rabbits’ Hill pt.II” – Insight of the concept 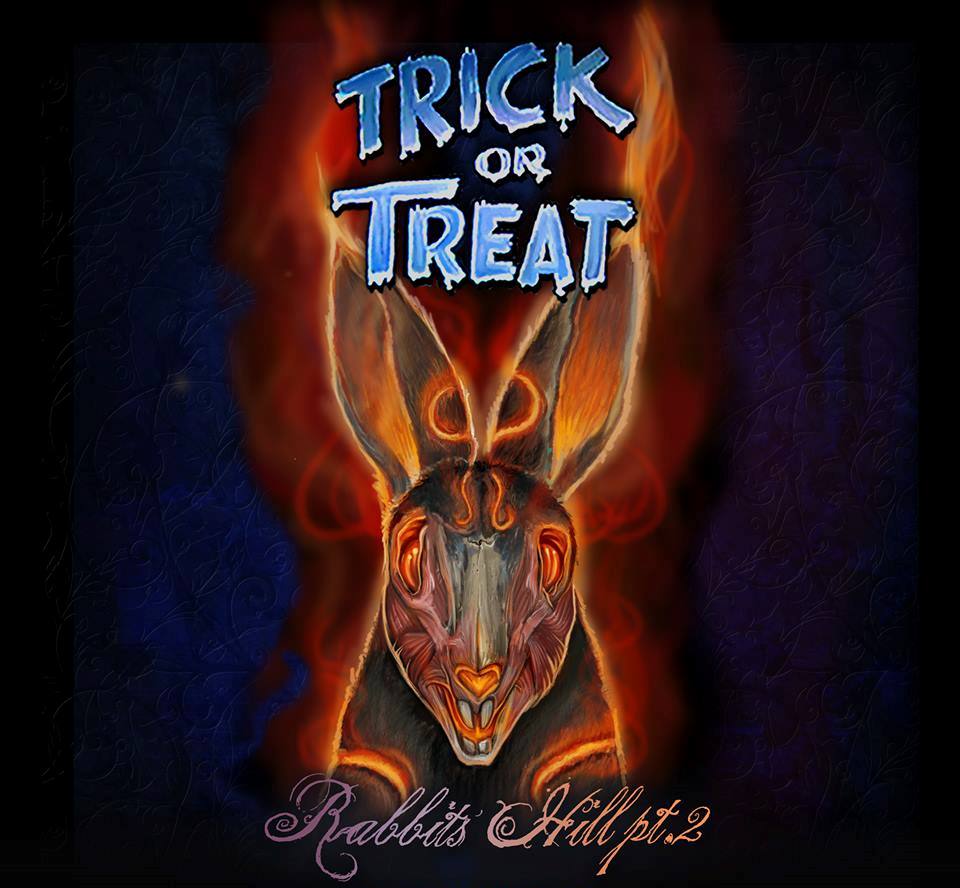 I’m an indie extreme metal supporter and my site stands just for it, but I’d love to write my feelings for the incredible concept album “Rabbits’ Hill pt.II” created by my favorite Italian power metal band Trick Or Treat.
It was more than a decade ago when I was totally into “Watership Down” by Richard Adams for the first time. I read it as Japanese edition “ウォータシップダウンのウサギたち” at that time. Time passed by, Trick Or Treat pulled the trigger of my passion for the epic adventure again with their two concept albums.
So I finally read the book as the original English edition lately. The story never gets old and blew me away over again! And I also found out once again, such a talented band Trick Or Treat is. The tunes and lyrics perfectly describe the Watership Down universe in their way, that’s just incredible!
If you are a fan of both of Watership Down and metal, I bet you’ll never be disappointed with the album, so why don't you try it?
Trick Or Treat drew the first half of Watership Down in Rabbits’ Hill pt.I (covers “The Journey” and “On Watership Down” in the book) about 4 years ago and finally the second half of the story: Rabbits’ Hill pt.II (covers “Efrafa” and “Hazel-rah” in the book) came out this summer with more sophisticated sounds.
Here’s my very personal review for Rabbits’ Hill pt.II about the great collaboration between “Watership Down” and metal. I rarely write album reviews for my site cos everybody has different feelings and tastes about music and you can get what you feel only by listening to it with your own ears, not from other people’s words, never. You even can start it with YouTube. And if you feel good with it, you can buy it wherever as long as it’s a regal way and can support metal. I never want to act like a judge for any music, so this review covers some insight of the concept with my love for the story and the album without rating. I hope you enjoy it.

Note: It could be spoilers for the story of Watership Down. So if you don't know the story so far and want to read the book, please remember the following review could show you some detail of the story especially second half of it.

Watership Down is an enormous adventure about “fight for freedom” through a bunch of brave wild rabbits and the book contents stories from two different rabbit’s worlds. One of them is the main story drew up a chronology of events as adventures of the wild rabbits, and the other one stands as “traditional story” a kind of rabbit’s bible told by the rabbits and it often gives them some bravery and hits for how to cope with their struggles for life with their enemies. So, Trick Or Treat dealt with both of them in the album and the opener Inlé(the black rabbit of death) is just about the most dreadful existence(the black rabbit of Inlé) in the rabbits’ myth. As an extreme metal lover, I’m happy to hear some growl part in the song honestly. The word “Inlé” comes from the rabbits’s original language Lapine and it means literally “moon”, and second meaning of it is “darkness”, “fear” and “death”. So, it could be some death metal song, *grin*. Anyway, the song is edgy and aggressive, and it’s just appropriate for the opener of the album. Great piece! It’s a contrasting pair with Prince with a 1000 enemies the opening track of Rabbits’ Hill pt.I pointed the rabbit folk hero(in their myth) El-ahrairah. It’s just like darkness and light. You can find them in both of cover arts.
I also should mention the fact that all those fabulous arts through Rabbits’ Hill pt.I & II are done by Alessandro Conti the amazing singer of the band. 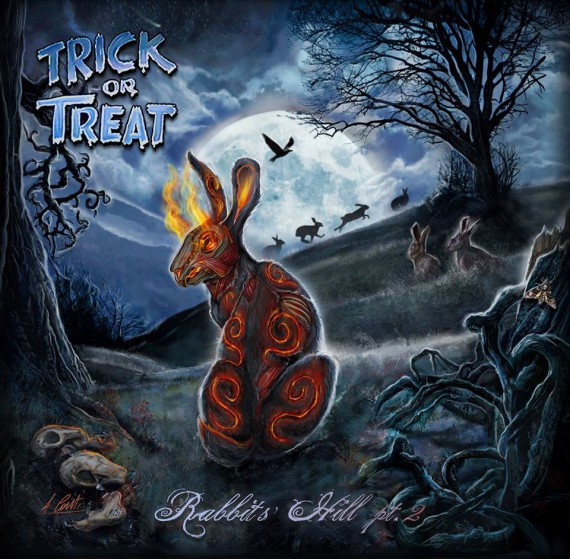 Well, in the ending of the first half of the story, Hazel (the protagonist rabbit) shot down by a farmer at Nuthanger Farm right after the raid for hutch-rabbits there in the name of freedom. Together Again is the song about Hazel’s return from his chasm of death (related songs: I’ll come back for you and Bright eyes from pt.I) and the reunion with his buddies especially his youngest brother Fiver who didn't give up his existence. The short, calm and gentle song gives a new hope for the story.

Cloudrider is a song about Kehaar the sea gull saved by the rabbits, and it’s definitely one of my favorite songs from the album. Like Bigwig (Thlayli) says “You know, he made me feel I could fly too. That Big Water! I wish I could see it.”, Kehaar is wings of hope for the rabbits, and Trick Or Treat is my Kehaar setting me free (at heart) like a bird in the blue sky. Such a brilliant song with full of positivity they created!
The Hazel’s give-and-take idea through the rescue of Kehaar and a mouse reminds me the famous quote from Confucius ‘the good you do for others is good you do yourself’, by the way.

The epic adventure heads toward the merciless rabbits empire - Efrafa with the almost impossible mission organized by Team Hazel-rah. The intro of Efrafa shows you a creepy and cruel mood enough already. It’s a song about Blackavar imprisoned by Efrafan officers because he tried to run away from Efrafa once before. No matter he is imprisoned in a dark hole or not, Efrafa itself is just a big prison for him and many simple rabbits there. The song starts with Blackavar’s grief but it leads to a light in the dark brought by Bigwig. I’m always moved by Bigwig’s everlasting strength built on friendship, charity and justice. The chorus part shows you there’s some hope for escape from the hell.

Never Say Goodbye is another song of hope between Bigwig and Hyzenthlay. It’s a song about Hyzenthlay‘s longing for freedom and Bigwig’s conviction for escape. With a relationship built on trust, freedom’s not a dream anymore. The mission-impossible of Team Hazel-rah stands on the brighter future of Watership Down warren. They made through the crisis of their home warren at Sandleford (related songs: Spring in the warren,  Premonition  and Wrong Turn from pt.I) and the sham nation of Cowslip’s warren (related songs: False paradise and Between anger and tears from pt.I) and finally found their new promised land Watership Down (related song: Rabbits’ hill from pt.I), but without female rabbits like Hyzenthlay, there’s no hope for their future. I always love the story of “freedom call” or “freedom fighters”. Sara Squadrani did a great job as Hyzenthlay to express her long time eagerness for freedom. It’s just soulful and beautiful. 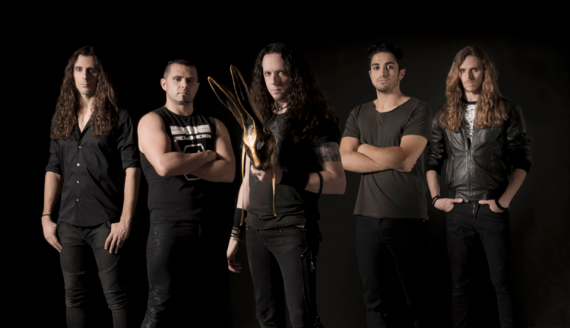 Trick Or Treat is often described as Happy Metal. The Great Escape is just a party piece in that way. The story of the escape from Efrafa stands extremely critical but the song itself has very positive tones and that’s why I’m into the song. The lyrics start from the courageous determination between Bigwig and Efrafan folk rabbits right before the escape from Efrafa into the storm and it covers along the way towards Watership Down warren including the breathtaking scene with the rabbit’s trick: using a men’s boat arranged by Hazel and Blackberry. With the exhilarating chorus part, the song is filled with an exciting mood and positive energies. That’s just brilliant!

Here comes General Woundwort the fierce Efrafan emperor. The regime of terror is the the only way to rule the world for him and he got frantically mad with the bunch of death-defying prison-breakers leading by Bigwig. So They Must Die is very aggressive metal piece with the edgy sound and Tim Owens’s charismatic vocals. It describes very well about General Woundwort’s extreme ferocity and such a twisted obsessiveness.

Well, The tale of Rowsby Woof is one of my favorite songs in pt.I with some Celtic folk song atmosphere. It’s taken from rabbits’ myths with an El-ahrirar’s trick. It’s told by Dandelion as usual before the following Efrafans’ attack. So, in order of the book, the song should be stood between Beware The Train (instrumental) and United but as long as the tale could sync with Nuthanger Farm’s watchdog, I think the band found a good position for the song. So, United shows you the determination for being brave under the flag of brotherhood and freedom, and the preparation for the upcoming final battle. The song has a good vibe and stands as a booster for the following highlight: The Showdown.

Team Hazel-rah has been saved over again by Fiver’s visions, Bigwig’s strength and Hazel’s wisdom inspired by El-ahrirah’s tricks. The Showdown is a song about their showdown literally via the final battle at Watership Down warren and it’s my biggest favorite song in the album. The tunes and lyrics are absolutely brilliant and I almost forget about the fact it has 10:47 as running time. I want to shout this out that my hat goes off to genius Guido Benedetti for the full deck of amazing songs! In the middle of the song, once the hope almost dies down with the Bigwig’s defeat through the epic fight with General Woundwort, but Lord Frith didn’t reprobate Bigwig, Hazel and his all buddies and gave them another trick for the demise of the battle. I have huge goose-bumps every time with the epic final lines: “We see the rising sun, we feel the rising sun, WE ARE THE RISING SUN.” Such a perfect song ever!

The grand finale of their adventure is filled with hope and brighter future, but every life has its ending. Last Breath is the most beautiful and emotional song I’ve ever listened to in my whole metal life. It’s just like touching to the softest part of my heart and I can’t resist tears every time listening to the song. I really love the epilogue of the story and this amazing song as well cos both of them are extremely pure and peaceful. Now Hazel is going to accept his final journey towards another paradise in bliss with his body left behind. Alle’s vocals are just overwhelming and beyond perfect to describe that sensitive moment. With his final shout: “Farewell my land”, I even have to catch back a sob every time. I have to say any words can’t be enough to describe how fantastic this song is. All you can do is to experience it with your own heart and ears.

Trick Or Treat’s “Rabbits’ Hill pt.II” got an epic victory with their incredible songwriting ability and technical play, plus endless positive energies and passion for what they do. The album is definitely one of the best releases of the year for me.

Last of all...
I love readings. It’s much better than movies and TV programs in many ways. But I just shout this out MUSIC IS A MIRACLE! I’d love to pay my endless respects for all genius metal musicians. I just want to say thanks a lot to them from the bottom of my heart.
My thankfulness goes to every single reader of my blog as well.

To metal brothers and sisters united under the metal flag,
Pay for music, support metal bands!

Trick Or Treat are: 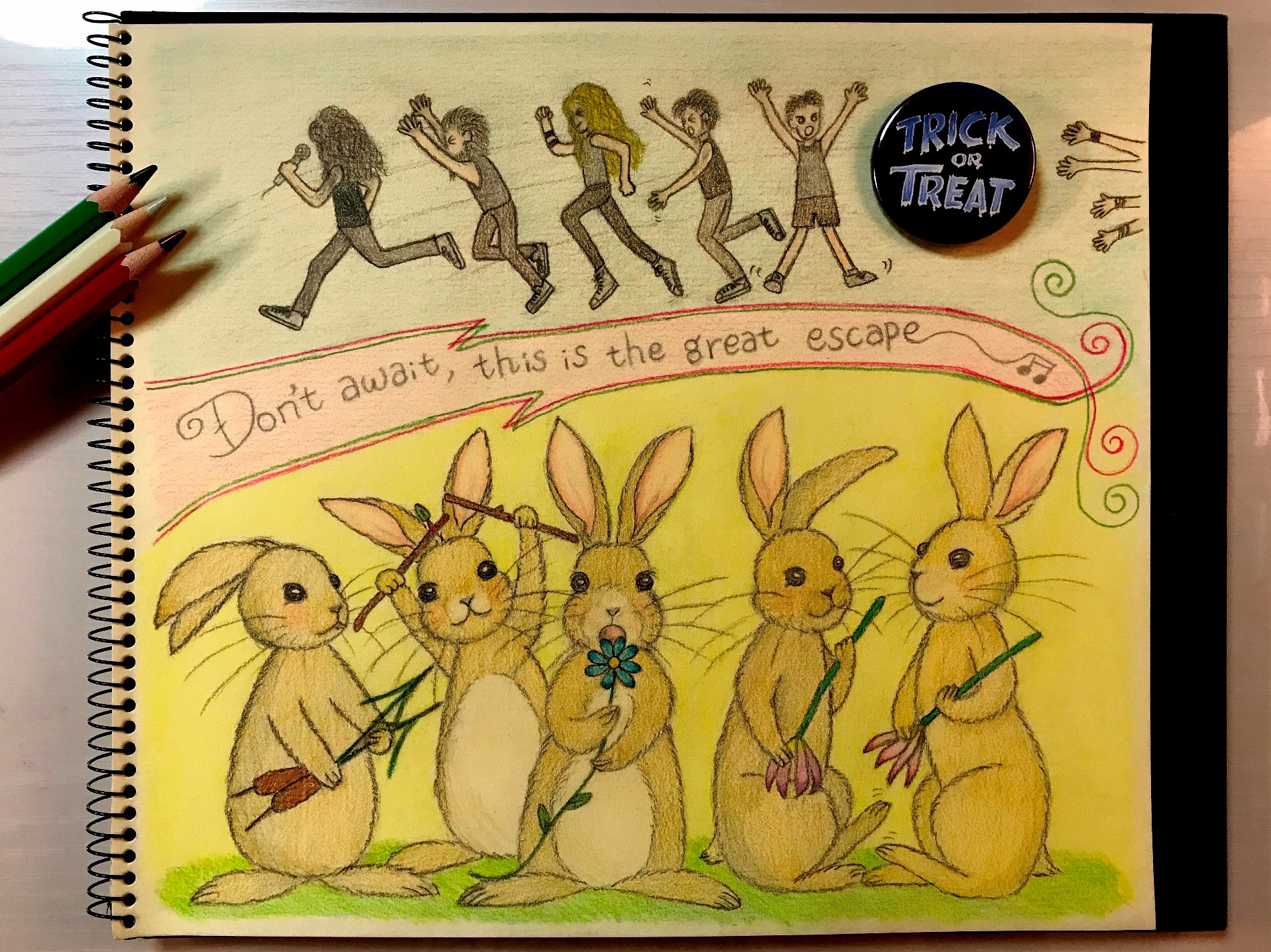