Part.II - Interview about the Japan Tour

Could you tell us your very first impression of our country after hitting the streets in Tokyo for the first time?

SLR: Tokyo is intense! This city and its citizens, and its architecture, and the whole vibe - so very special. Tokyo wears its own cultural image proudly. And the good weather made us all very happy. We’ve felt like being catapulted into hot summer right from cold and rainy Saint Petersburg.

In Tokyo everything is eye-catchy and very beautiful, it’s a city of bright lights, high buildings and huge crowds. The quality of roadways surface is exciting, the cars are very cool - even old models. Another cool fact: in Tokyo car traffic is very pedestrian-friendly, peopler on streets obviously outnumber vehicles. The city is very green - which brings chilling vibes into this concrete jungle. Lifestyles there are fast-paced though. Japan is so different from Russia and Europe in general.

Did you have time to visit any place for sight-seeing in Tokyo and Osaka?

SLR: Fortunately we’ve had the whole first day off and we’ve managed to spend most of our free time walking around Tokyo. The very first thing we saw after the airport was Shibuya station - and when we’ve came out of it into the city - wow, we got lost inside a kaleidoscope of impressions. The city turned out to become especially fantastic after dark. Before the gig we’ve visited Asakusa, the city’s ancient district, where the spirit of traditional Japanese culture lives on. This recharged our spiritual batteries to the max.

We didn’t have too much time to walk around Osaka - came just in time to start our soundcheck and after the gig went straight to eat and sleep (we had to go back to Tokyo really early next morning).

How did you feel the cultural difference between Russia and our country?

SLR: Oh, definitely. Of course you can’t call it a deep analysis - but we’ve had a very strong feeling that the key element to everything Japanese people do is RESPECT. You guys really respect your own traditions, foreign traditions, Nature, each others and yourselves. Traditional designs are presented everywhere in city life - be it houses, restaurants or shops. You can see some people wearing traditional costumes. Your eye catches traditional elements even when you’re driving fast down the highway - some very typical roof shapes here and there, or private camping sites with those little gardens and arbors.

In public spaces people never try to cut the line they tend to do the opposite - stepping aside and making way to others. No one seems to hurry, cars are slow too - it’s amazing that everything is always done on time.

In fact, Sunless Rise took a role of co-headliner with Shade Empire and Serenity In Murder for 3 shows in Tokyo and Osaka even it was the very first Japan Tour for you guys. That was really cool, huh?

SLR: It was a blast! No matter how many tours there are in our future - this trip we’ll never forget. Before the tour we felt exhausted for certain reasons, but the experience turned out to be so inspirational. We’ve had a proof that people really love our music and we must move forward no matter what.

So, how was the first show in Japan? Did you satisfy with the audience in Osaka?

SLR: It was our first ever performance outside Russia. Osaka gig blew our minds. The crowd reaction was phenomenal, people waved back to every gesture, they screamed and showed a crazy support. Some even sang along - unimaginable! We could never expect that so many people in country as far as Japan know our songs. And suddenly we realized: wow, they all were waiting for us! Some dude told us that he was listening to “Nothing To Save” on his every ride to institute. Some dudes came all the way from Hong Kong to see our set. Some brought Russian flags - they’ve set them in front of the stage and we’ve signed them. The number of people was not very huge but the support was unbelievable.

And then, I finally met up with you guys for the first time at the first show in Tokyo, woohoo. Of course the show was a blast and I felt absolutely special with the graphical projection right behind the stage. It reminded me the DT’s stage set, was really cool to see the projection perfectly syncing with each of the songs. I love it. Do you usually use it for your shows in Russia as well?

SLR: We are so very glad to finally have a chance to meet you! Your help with bringing our music to so many metal fans here in Japan is priceless! The gig in Unit was the best gig in Sunless Rise history. So many people, such a great feedback. They started circle pits, slam danced, waved arms and rocked out like crazy. We did our best to give this energy back, no chance to fail. The gig was perfect, every band was fantastic. We’ve had a big signing session.

Every show on tour was very well-supported, people rocked out and bought merch.

Did you feel a huge difference between kinda Russian way of stage setup and our style, about equipment or crew?

SLR: The whole process was organized surprisingly well - people here don’t fail each other (in Russia it’s not 100% like that). Every venue was equipped with very good gear and all the professional services were provided with high class specialists. These guys are top in their job, they’ve even studied our tracks beforehand to set the show just perfect. Actually I’d recommend to most sound and light engineers in Russia to learn from their hard-working and all-focused colleagues in Japan. 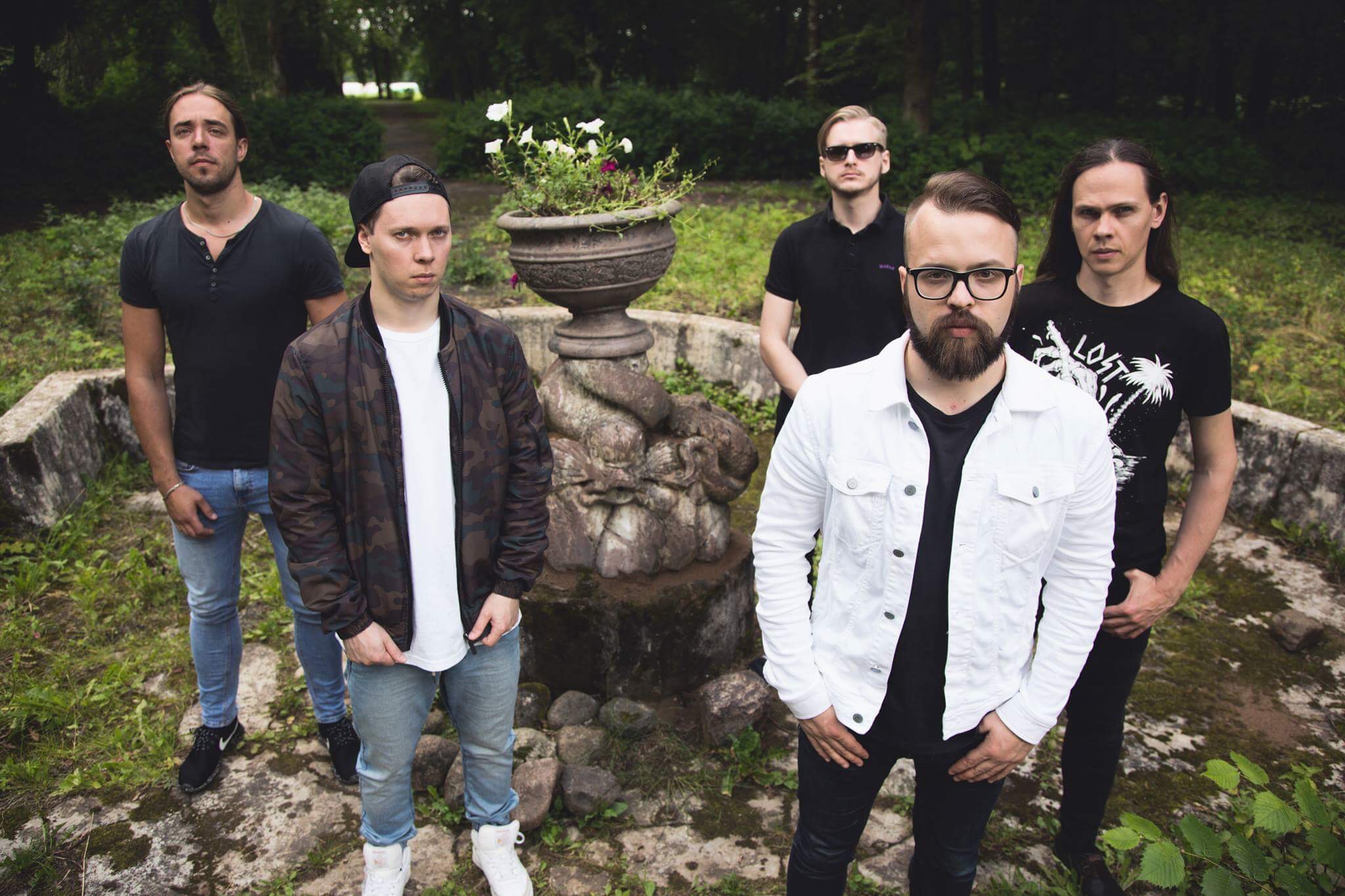 Well, the second show in Tokyo was the finale of the tour. The venue was a bit narrow than the previous one but the energy of you guys on stage was overwhelming and was a killer show again! Did you like the audience in Tokyo as well?

SLR: The last Japan show was very warm and intimate. The audience - we can’t praise enough their massive support. At every of those three shows.

As you know, I gave you guys “Ichiban” (means “number one”) bandanas cos “Unrevealed” is a literally and definitely number one album in 2015. There’s no doubt it’s a true masterpiece. So that was really fun when you guys reappeared on stage with the bandanas, haha. Who got the idea?

SLR: This was our singer Ivan’s idea, he was assured by local musicians that it would be alright to wear it on stage. The crowd seemed to like it 🙂

As you promised to fans in Japan, you played the fabulous new song “Flywheel”.
It has fast and extreme verses but the chorus part is absolutely melodic and beautiful. I love it. How did you feel to play the song on stage for the first time?

SLR: This track is intended to sound great live. And it proved to sound great live, just as we thought. There are parts to mosh to and melodic choruses to balance the rage. It was cool to see people wave hands as one during those chorus parts. We’ve said it before and will say it again: you guys are fantastic audience!

Did you finish mixing and mastering for “Flywheel” already? (It's available now.!)

SLR: We’ve finished mixing it right before the tour and it’s out now, today. Sorry it took so much time answering your questions - but hey, good news: “Flywheel” is now available via Bandcamp, YouTube, iTunes, Spotify etc. We hope people like it. This track sounds not very typical to Sunless Rise, but we try our best to stay good songwriters. And there are much more new stuff to come.

How about the whole album? How many songs did you finish writing so far?

SLR: The process has started. We’ve already wrote enough tracks to fit the album, even more. It’s a big work that we want to execute perfectly, so it would satisfy our creative ambitions. The concept and arrangements take a lot of time and energy. Sometimes we rewrite and rearrange nearly 100% finished tracks if it they don’t sound right.

Is it a long way until its finalize?

SLR: It is very hard to predict the release date or even month. Definitely not this year. The album seems to become another “opus magnum”, complex and conceptual. But we promise: it won’t take as long as “Unrevealed” release!

Would you like to come back to Japan with the next album? Of course all of your fans in Japan would love to see you guys again anyway.

SLR: We dream about coming back to Japan every day since we came home. To present a new album, or even before that! Still full of positive emotions, memories of your country and your people are very warming, This trip made it sure: we do the right thing and we believe in ourselves. And we like it. We’ll try to keep our audience excited, huge thanks to every one of you! And a big personal ARIGATO to you, Kumi!

All about Sunless Rise on kumi666com.