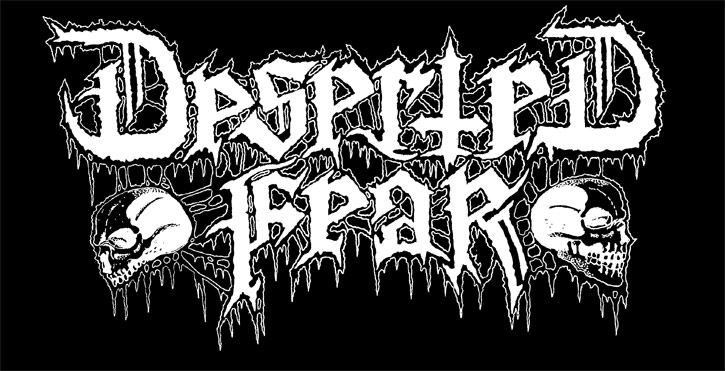 1. This is the first interview with you guys. First of all, can I ask you about Summer Breeze 2013 you played? How was the show?

Fabian: Hey Kumi! Summer Breeze was a blast! We played mighty Party.San Open Air in our home country Thuringia a few days earlier and this was our very first gig in front of such a massive crowd. Only five days later we played Summer Breeze and there it was again: The overwhelming view from the stage down to thousands of metalheads watching us. Still unbelievable to us. 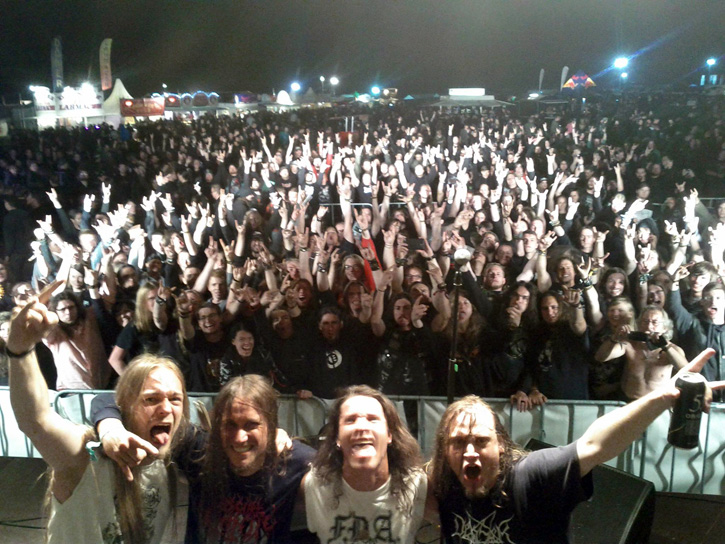 2. Did you enjoy the fest as metalheads as well? Were there any favorite bands played at the fest this year?

Fabian: Well, we had mixed feelings before we travelled there. Such big kinds of festivals are not our business as fans but we even never visited one of these. We’ve been pretty surprised, everything was planned very well and the whole process went very smooth. The best bands? To be honest: There where way too many we wanted to watch. It was always like **reading the running order** “WHAT?! They are playing here?! Come on – let’s go!”

3. Well, I would like to ask you about the history of DESERTED FEAR. When did you start the band and have you ever played in any other band before DESERTED FEAR?

Simon: The band was founded in 2007. Mahne and Fabian were friends for a few years and both played together in a punk band. After the band split up they decided to focus on other things but could not go on without making music for that long. So they started playing again: Metal! Of course you need a drummer and they have been friends to my bigger brother. We met randomly and they told me what they’re working on. I went like “Hey! I can drum! Let’s do this together!” Working together worked out very well and I decided to leave my other band. 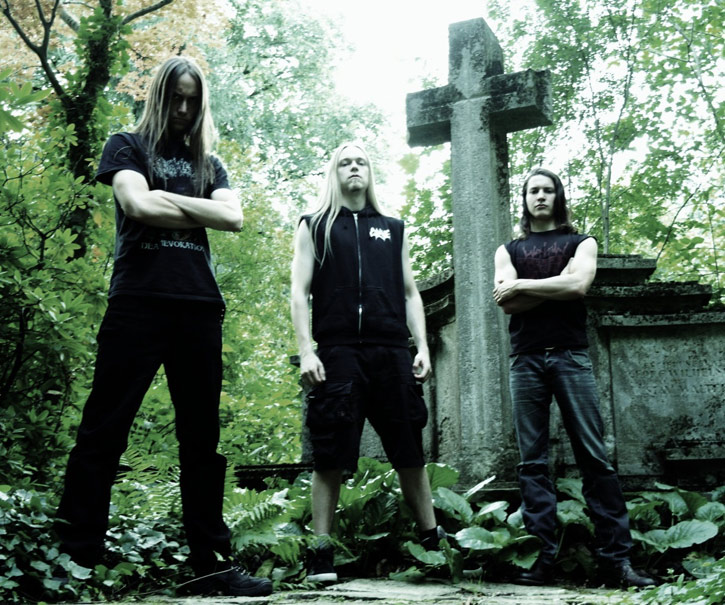 4. What kind of music / bands have you been influenced?

Simon: At the beginning it sounded more like melodic Death Metal, also the band had no name. After moving into our own rehearsal room the music changed by itself towards the roots of Death Metal. So all we can say is that bands like IN FLAMES, SOILWORK and ILLDISPOSED influenced us in the same way OBITUARY, DISMEMBER and ASPHYX did.

5. You guys are three-piece band, right? Could you introduce the current members to us?

Simon: Right at the moment we are four guys – our bass player Albi joined us in April 2012 for our Live shows. 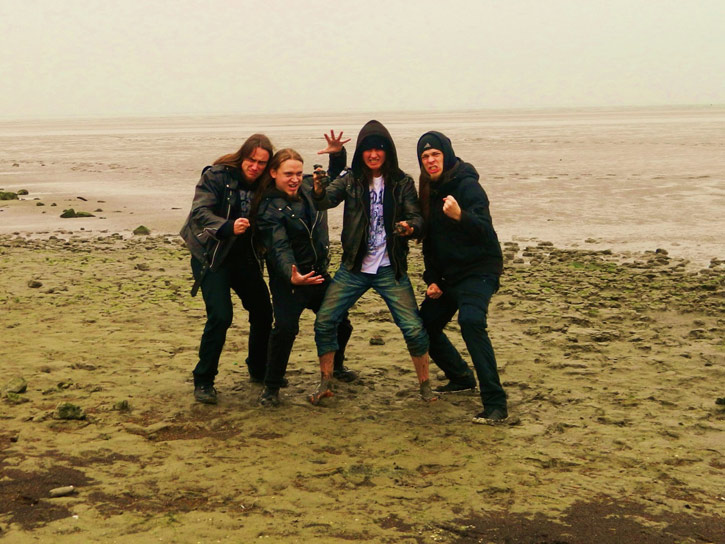 Our singer and guitarist Mahne is 26 years old and he’s working as a mechanic. Besides the band he likes to go fishing and endurance running. Also he’s got a Maine Coon Cat named Düse which means Jet in German. 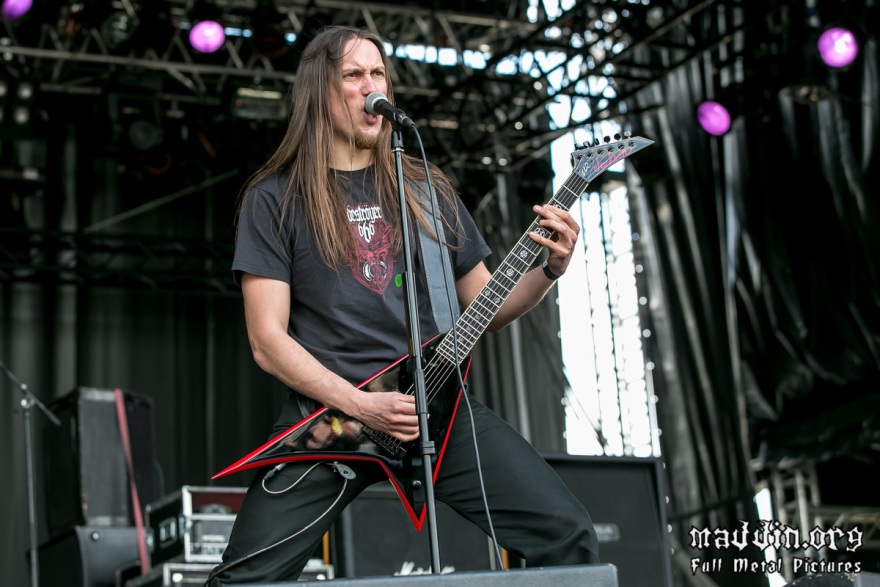 Bassist Albi is 23 and studies music. There is no safe place for beer in a backstage when Albi is entering. In his spare time he enjoys old computer games and plays the Cello in an orchestra. 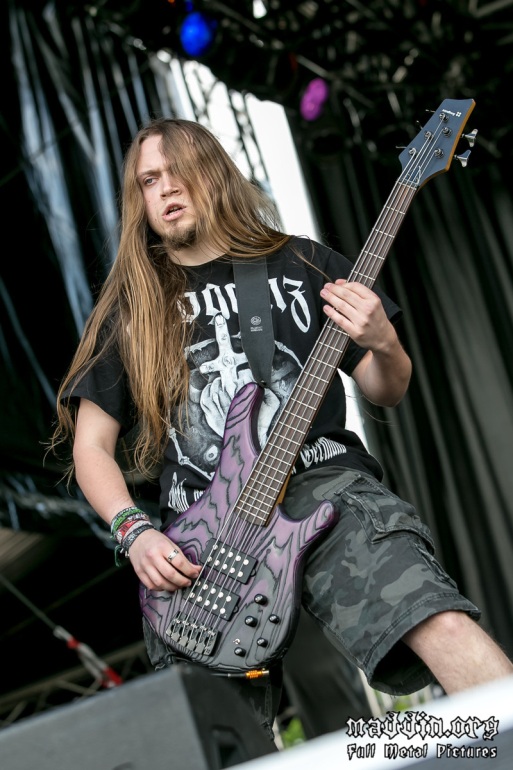 Our drummer, Simon (22), is working as a cemetery gardener. He likes gardening and relaxing nearly as much as sweating, can see dead people and is into politics. 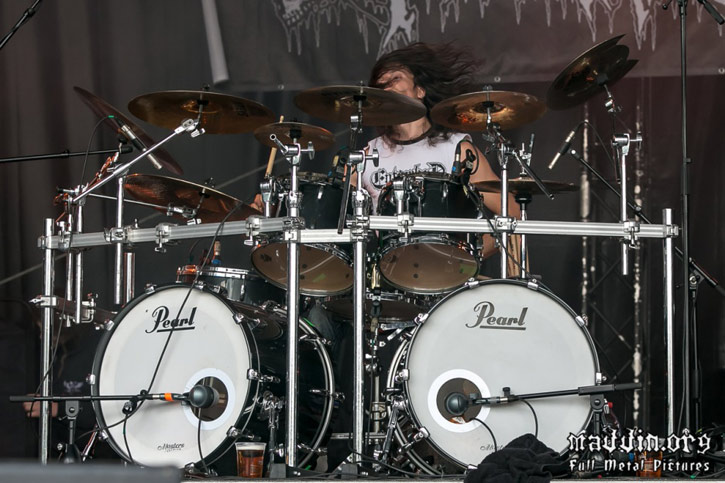 Fabian (guitar) also works as a mechanic. He is 26 and plays Basketball both on the court and on the Xbox. He likes to be on tour (with the band or besides it) or to go fishing – anyway: He never overlooks any woman. 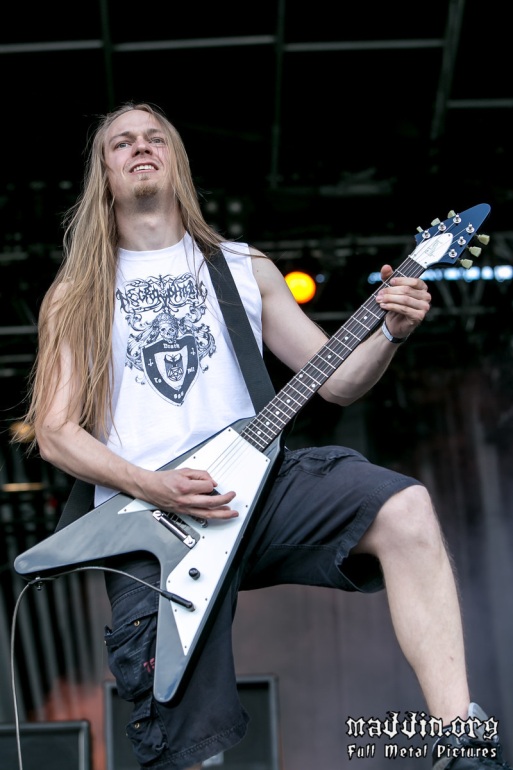 6. Your first full-length “My Empire” is totally fabulous! Do you have any conceptional theme on the album or did you simply put together those brilliant songs in it? 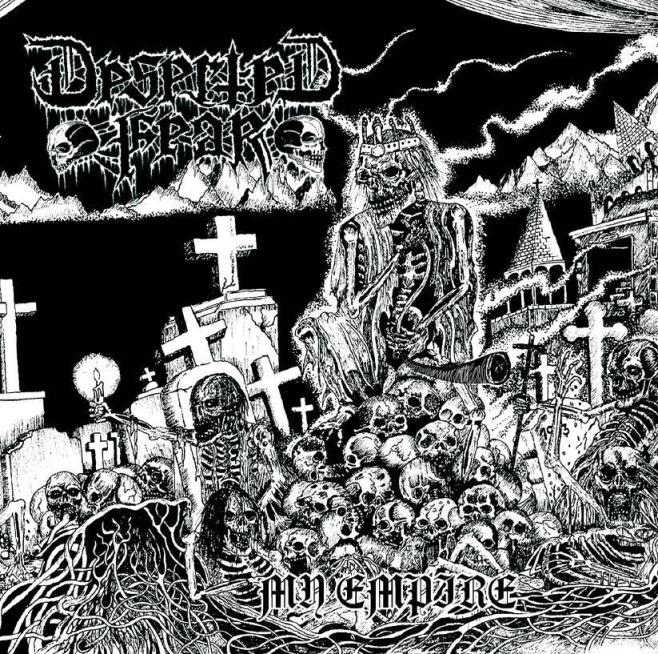 Fabian: Thank you! The single songs on MY EMPIRE have been finished from 2008 till 2011, when the recording of the album started. All in all they do not belong to each other and there is no strict concept. It’s very cool that they are coherent in the way they work together on the album, despite the fact that the songs are not chronologic. At this point we can say that MY EMPIRE is just the musical story of DESERTED FEAR.

7. Could you explain details of the album song by song for listeners?

01. INTRO
There was a second rehearsal room right next to the one we’re practicing in. The room was owned by a DJ who mainly did Techno stuff. Because we knew that he got the know-how and technic to do this stuff, we went to the supermarket, bought a load of beer and invaded his space during a very long night. After waking up we had no clue what we did but were surprised and pretty happy with the outcome! It hits the meaning of the artwork very good.

02. THE BATTALION OF INSANITIES
I think I went to the rehearsal with nothing more than two riffs and it worked out fantastic! We had a good flow and the song was quickly finished. It’s an excellent opener and the middle of the song commits to head banging. The song is about an army of the undead who will bring “chaos, destruction, fire, death!”

03. PESTILENTIAL
One of my favorite songs on the album. Mahne came up with the main riff and the second theme and we finished it together. The song has got an unusual structure but it’s very catchy at the same time. The lyrics are about the Pestilence as a weapon of the damned.

04. NOCTURNAL FRAGS
You can find NOCTURNAL FRAGS also on our DEMO released in 2010. This song is freakin’ groovy! The guitars were nearly finished when Simon heard the song. He loaded his canons, jumped into his tank and crushed everything down with this mighty groove! The solo is quite different from the one on the demo because we changed it a little during the recording sessions. The song is all about live, solitude and hate.

05. MORBID INFECTION
If I’m right, this is the first DESERTED FEAR song ever. You can hear a lot of Thrash Metal elements as well as some old-school Death tunes – very raw and extraordinary in its structure. The solo was done by our good friend Henrik who is an outstanding guitarist. Albi loves this one, maybe because he’s much into Thrash Metal. If you read the lyrics, you’ll find a little horror story.

06. THE BLACK INCANTATION
My favorite song on the album – groovy, catchy and straight forwards!
Mahne did a great job with the vocals and I love it when the one or the other sings it live with us! This is the one we did last for My Empire and the spooky solo was written during the recording. The lyrics are about humans as offerings, but you can also interpret current themes into it. Cool!

07. SCENE OF CRIME
Hahaha – all I wanted to do was a Thrash Metal song. Definitely, I failed! The main riff was finished already when we started to compose the rest during a rehearsal and then this raw Swedish style came into it. The song is a bit older, as you can find it on our DEMO CD. The lyrics are dealing with the downfall of a kingdom and its decay from the crown to the bone.

08. FIELD OF DEATH
After finishing the music we all went like “War should be the theme!”. Just the music tells the ups and downs of a war. Nobody should ever forget about the wars in history and the ones still raging on – everybody should be able to reflect a war on its own live and learn from those things. We did a video for this song on our own – check it out!

09. MY EMPIRE
The title track for the album and the one which hits the cover artwork best I think. Working on that one was also done during a rehearsal and all I have to say that this is some kind of killer track to perform live, while everybody is going freaking nuts. Somebody did a great video for this one too – you can find it on our YouTube channel.

10. BURY YOUR DEAD
Last chance to dance – hahaha. The last song on the album and also the last to play live at each show. I really don’t remember the whole developing process of the song because it has been quite a long time since we wrote it. It’s really diversified and heavy – rolling everything to the ground, just like some kind of hymn. Wicked one!

8. Well, you already finished writing several new songs, right? Do you have any obvious plan / vision for the next album?

Simon: You’re right – we’re working on new material. Six or seven Songs are finished already and some ideas are waiting to be manifested. Maybe there will be a new album after summer 2014.

Fabian: But it’s not like that we started writing new songs just only since yesterday. As the recordings for MY EMPIRE were done, we did the first stuff and then from time to time. Like MY EMPIRE, the new record won’t be any kind of concept or something – rather the new brick in the wall in the history of DESERTED FEAR. 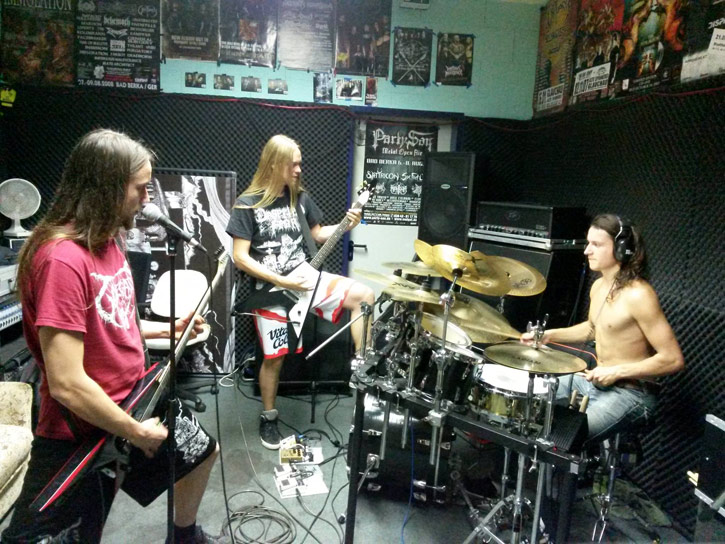 9. Are you interested in Japan as a metal market by the way?

Fabian: Hell no – we’re just interested in the Japanese woman! Hahaha – just kidding! The Japanese metal scene seems to be quite interesting. A lot of bands released special japan editions and the crowds at concerts look pretty big and motivated – all in all this looks like a heavy scene (awesome!). Certainly this impression grows from pictures and videos of bigger bands which do have a very good promotion and management. This makes me kinda curious because I want to know how things are working out for a small band like us. So Japanese metalheads, spread the word and the name DESERTED FEAR!

Fabian: Do you guys know the Japanese manga „The Kickers“? We loved it over here! Home from school, take off the shoes and hurry up to take place in front of the TV. Afterwards we went straight to the soccer field! Or Mila Superstar! „Mila can laugh as the sun over Fujiyama“ *singing* ... damn – this is the good stuff!

Simon: DESERTED FEAR is still unknown in Japan I think so check out our page on Facebook www.facebook.com/desertedfear
our homepage www.desertedfear.de
or our channel on YouTube www.youtube.com/desertedfear
Listen to the music and recommend us to your friends if you like it!