Many guys from NWOGM told me Kötti from BURDEN OF LIFE was totally drunk all the time at OUT & LOUD, so I didn't expect he could manage such a brilliant review about the fest with the heavy volume! Just check this out. 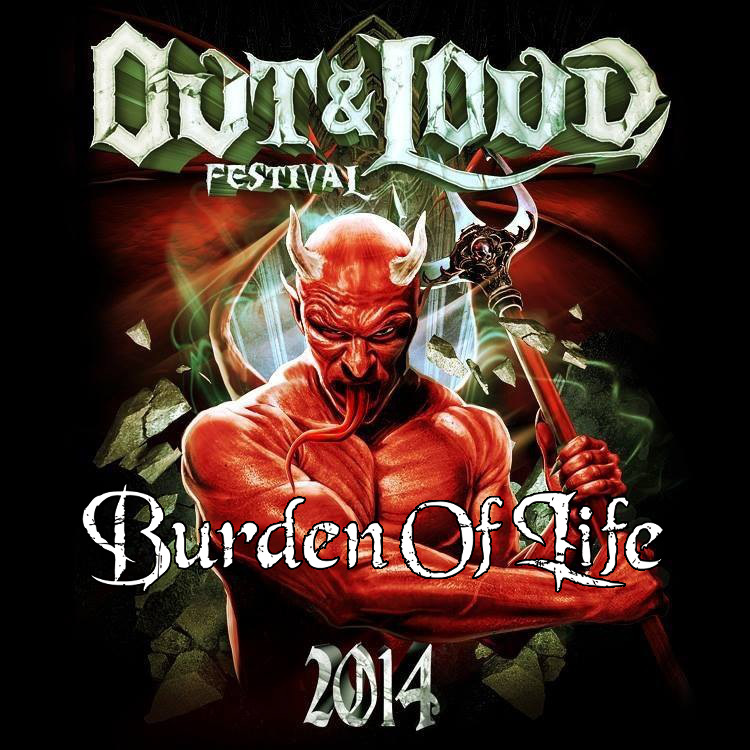 Kötti: It's already been a little more than a month since we, Burden Of Life, played at Out&Loud Festival in Geiselwind, Germany. Believe me, however, that the memories we made on these three days – some crystal clear, some booze-fueled and hazy – will stay with us for a much longer time.

Before we got the offer to play at said festival we had not played too many shows of that size and so we were more than excited to get yet another chance to prove ourselves in front of the audience which would (hopefully) be a little bigger than what we were normally used to. But first things first: most of us arrived almost exactly 48 hours before stage-time so there was still some time to kill, some music to absorb and some beers to consume. Sleep was a little scarce but hey, it's a festival ain't it? 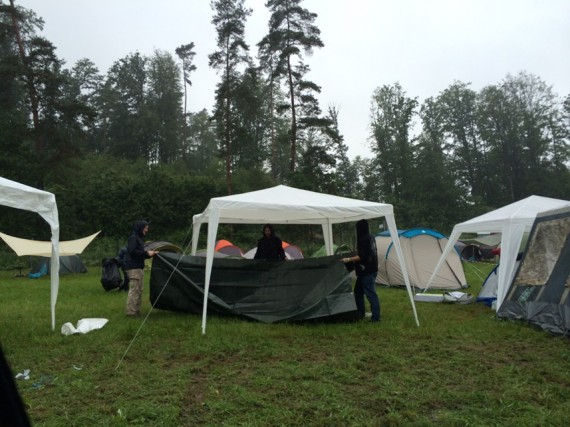 So with our tents set up in between the camps of our friends in Soulbound, The Last Hangmen, Parasite Inc., Mnyded and many others we made our way to the stage area at around three p.m. on Thursday for the first time. The first band we watched was Sólstafir which is one of my current favorites so I was really psyched and the guys did not disappoint! The slight showers of rain even amplified the atmosphere of their epic compositions. Right after that we went to the Newcomer Stage and witnessed the extremely professional and sympathetic show by our friends in Soulbound. And to be honest; before we arrived at the site I was a little worried the people wouldn't really pay attention to a stage full of relatively unknown bands. Oh boy was I wrong and this show was the first proof. The people, including us of course, went crazy and they were right in doing so. Johnny even started the show off in his leather jacket as a favor to me. I do not exactly remember why I asked him to do it but the fact that he did do it made me smile and once again proved that these guys are not only good musicians but also incredibly nice and fun-loving people.

The rest of the day was spent with more music, booze and joking around and we had a really good time with all the guys from the other bands. Johnny took it a little too far I guess threw and his voice out completely over the next 24 hours. Good thing their show was already over! :D

Friday fortunately greeted us with the weather situation a little improved over the relatively shitty Thursday. The first band I watched on the second day of the festival were the guys in Parasite Inc. All of you Kumi friends and supporters who are reading this surely know that their debut effort “Time Tears Down” made massive waves in the German underground scene and it did so with good reason. So I expected a lot of people in front of the stage. And indeed, the hall was packed. Packed enough even, to make Kai speechless in between songs. The band is a well-oiled machine and they presented their songs as professional as ever. Their new guitar player also fit in seamlessly. Way to go guys!

The Last Hangmen were the next band on my schedule. These guys have become really good friends of ours over the last three years and playing shows with them is always a highlight. Driven by their Blast-beat-O-Meter Ronny they shredded their way through 40 minutes of their signature Melodic Extreme Metal.

Unfortunately shortly after their show  –  which was no later than eight p.m. I think – it was already time for me to hit the hay. For one thing I've had  a little too much to drink and for another I needed to get as much sleep as possible for it was show-time for us on Saturday. But I was told that the others had a fun time drinking and talking late into the night and in the process make Johnny eventually lose his voice entirely. 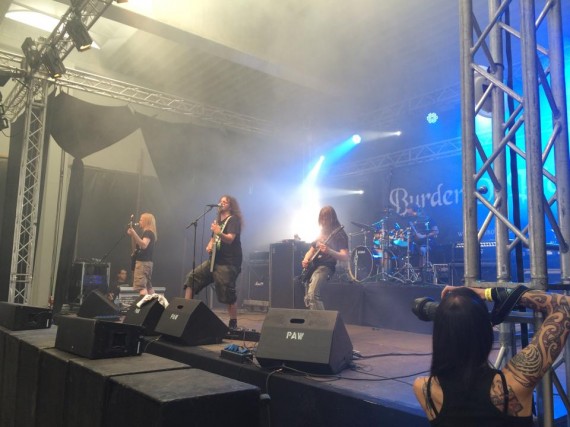 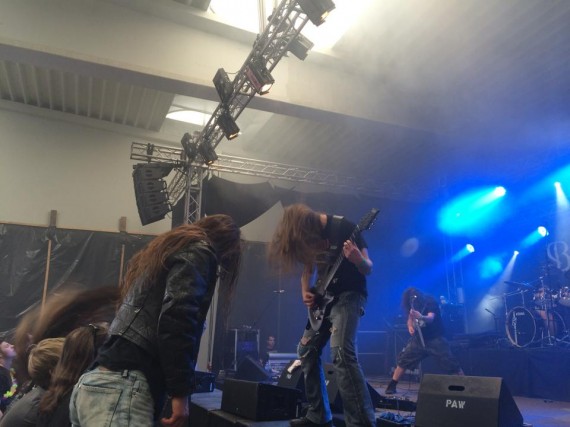 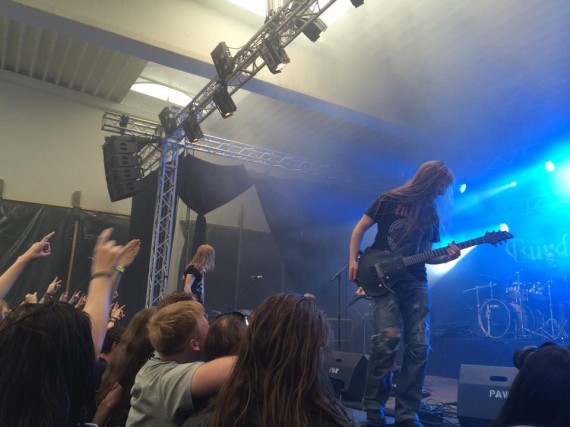 The time in between getting up and playing the show was mostly used to welcome the rest of our band at the camping site and getting ready for the show. Of course, shortly before hitting the stage we all got a little nervous and the obligatory “What if we're the exception to the rule an nobody shows up?!”-question entered our minds. But as soon as we hit the stage people started cheering and shouting and from the first note onward they were head-banging and partying along to our music. It was without a doubt one of the most awesome shows we ever played and we had an absolute blast. The 40 minutes rushed past us and as the last notes of “Breathing The Soil” faded away we enjoyed the applause for a little bit and then started packing up our things.

The last few hours we had left we spent at the New Wave Of German Metal booth, hanging out with our friends, and watching some more bands like our friends in Mynded (awesome Thrash Metal, check them out) and the mighty Blind Guardian. Shortly after the headliners ended their set we said goodbye to all the other bands and made our way home through the night.

Overall it was an absolutely amazing experience and we hope that there will be more opportunities like this in the future. There are a few people I would like to mention here, for they particularly helped to make it a wonderful weekend: First of all our thanks go to Flori who spearheaded the New Wave Of German Metal through this experience and made it possible for all eleven NWOGM Bands to play at the festival. We also would like to thank the people organizing the O&L Festival for believing in the idea of a stage full of newcomers, this is not a common thing and we know and appreciate that. Furthermore we would like to thank Bettina of Dark & Sweet Things and Natts of Shoother for their incredible endurance and passion taking really awesome pictures which make us once again look way more cool than in real life. We also say thanks to our friend Bergi who was not only our Merch Guy/Roadie but also a valid force of entertainment on the campground for everyone present. Oh and of course thanks as always to Kumi for her support and interest, you rule!

Last but not least we want to thank all the guys in the other bands we spent these three days with. YOU.ARE.AWESOME. Hope to see you all way more often in the future! Now back to songwriting for Burden Of Life – Album III! 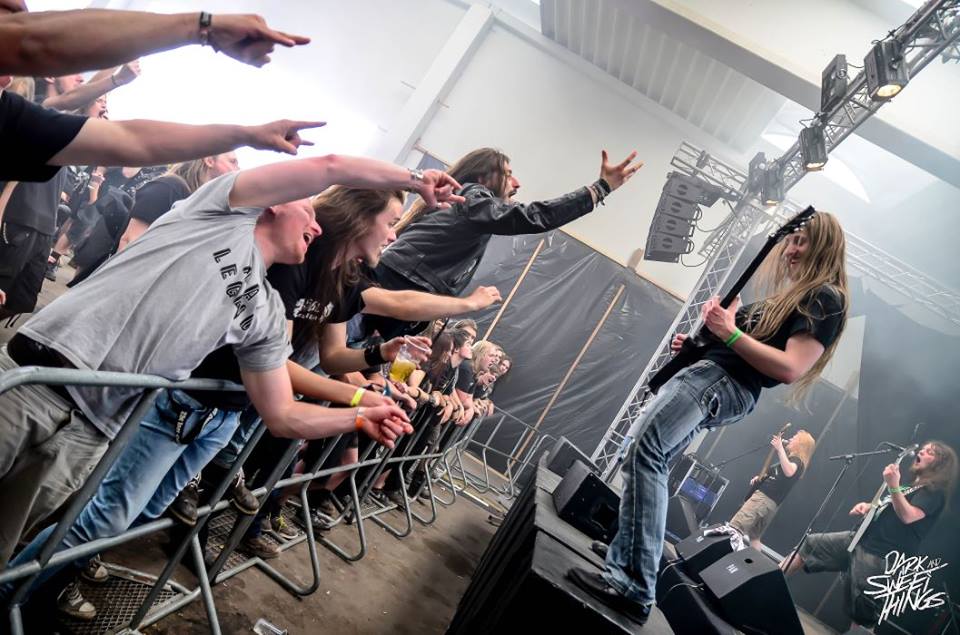 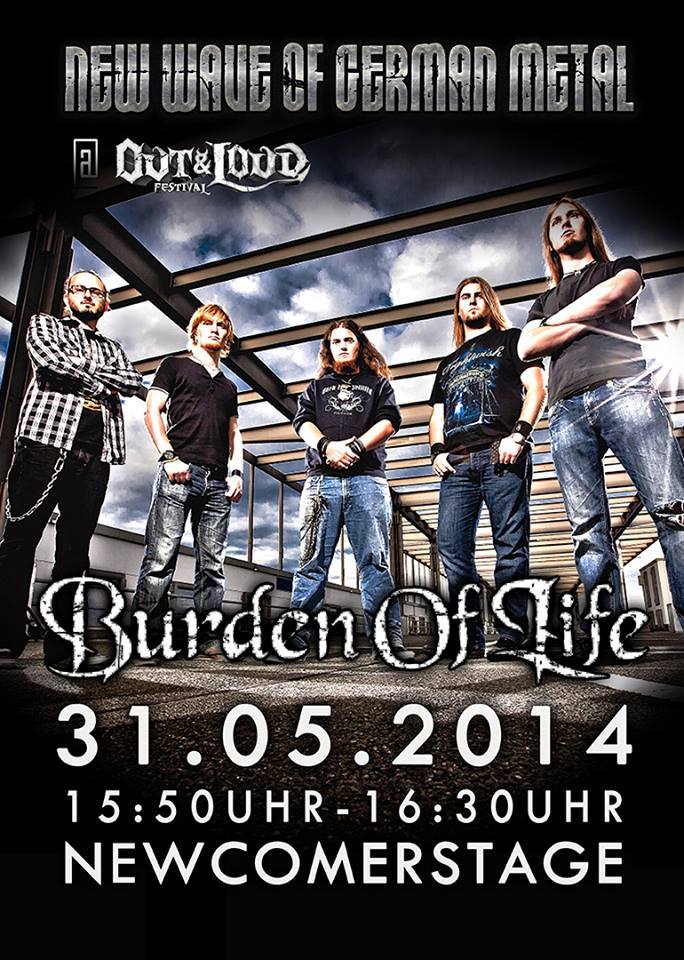